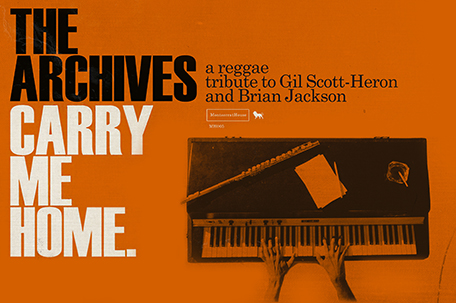 ABOVE PHOTO: This cover imagereleased by Montserrat House shows “Carry Me Home. A Reggae Tribute To Gil Scott-Heron & Brian Jackson” by The Archives.  (Montserrat House via AP)

The Archives, a reggae band from Washington, D.C., pay an inspired tribute to the late, groundbreaking soul and jazz poet and musician Gil Scott-Heron — and his collaborator Brian Jackson — on songs from the 1970s that are still powerfully relevant today.

Founded and led by keyboardist Darryl “Trane” Burke, who produced the album with Eric Hilton of Thievery Corporation, The Archives play at a very high level. With some notable guests, including Jackson himself, they’ve made a very fine album.

The band’s homebase is a connection — Scott-Heron and Jackson lived in the city and the area for years — and the reggae versions aren’t a random stylistic choice either, as Scott-Heron’s father was a Jamaican soccer player.

Opener “Home Is Where the Hatred Is” is like a first-person update of John Prine’s heartbreaking “Sam Stone.” Instead of the addict’s child lamenting the father’s torment, the junkie himself tells the tale — “Home is where I live inside my white powder dreams.” Puma Ptah’s vocals and a horn section both add degrees of drama.

Scott-Heron’s best-known composition, “The Revolution Will Not Be Televised,” is stripped of most of its lengthy lyrics, a sensible choice as, for example, neither Spiro Agnew nor John Mitchell mean today what they did during the Nixon era and trying to update the references may have been an unnecessary step too far.

“Who’ll Pay Reparations on My Soul?” draws power from its harsh questions and all-too-familiar life story, while “Must Be Something” features Jackson as one of three vocalists, their singing the best part of a great arrangement.

Raheem DeVaughn puts some very touching Marvin Gaye-like vocals on “A Toast to the People” and Jackson plays a Grandmother Moog on “Winter in America,” another classic he co-wrote with Scott-Heron.

“Carry Me Home” is a true labor of love that respectfully but bravely re-imagines a selection of great songs while placing a much-deserved spotlight on a pair of pioneers whose messages continue to ring too true.

Poetic Thought: Gil Scott-Heron was a big part of the soundtrack of my adult life