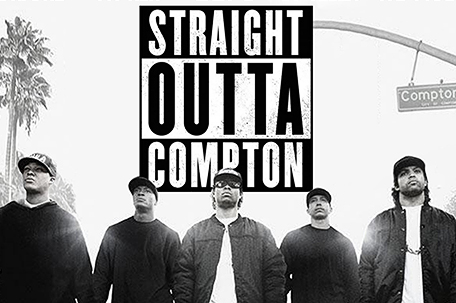 Introduction–In 1987, five young men, using brutally honest rhymes and hardcore beats, put their frustration and anger about life in the most dangerous place in America into the most powerful weapon they had: their music.  Taking us back to where it all began, Straight Outta Compton tells the true story of how these cultural rebels—armed only with their lyrics, swagger, bravado and raw talent—stood up to the authorities that meant to keep them down and formed the world’s most dangerous group, N.W.A.  And as they spoke the truth that no one had before and exposed life in the hood, their voice ignited a social revolution that is still reverberating today.

I was planning to save this until next week, but there’s no better time like the present. And of course it’s controversial, but I’m willing to bet that many you can’t wait to see it. I’m referring, of course, to the long awaited “Straight Outta Compton” – the film about the infamous rap group N.W.A. directed and co-produced by F. Gary Gray.

Well, just between you and me, I’ve seen it already, all epic length, 2 1/2 hours of it, and I think it’s pretty damn good. It’s pretty much a straight forward retelling of the rise and eventual fall of the group, but I have to admit that it’s very compelling, tells a fascinating story and displays some real visual flair. I honestly think it’s the best thing that Gray has ever done to date as a director. There’s real sense of commitment behind his camera, and you can tell that the subject means a lot to him, and he had to get it right.

And I will say right now that’s it going to a big hit at the box office. It hits all the right buttons in terms of story, and it’ll attract older audiences looking for a nostalgia trip, as well as younger audiences, and it plays like gangbusters to the audience. And as for the question about crossover appeal, for the record, there were quite a few white people in the audience I saw the film with.

So it all got me thinking – what the film would actually do on its opening weekend, when it opens on August 14th. I would be surprised if it does anything less than $40 million, with the potential of doing $90-100 million domestically total. A $35 million opening would be pretty good, but anything less than that I would call a disappointment.

But one of the main reasons why I predict this is not only because it’s a really well made film that works, but it’s also a great example of Sergio’s rule that, if you can make me interested in something I know nothing about, or I’m not interested in, then it’s really good.

Also worth noting is that the advance reviews so far for the film have been raves or close to raves. Though I’ve noticed that, in almost every single review, the reviewer seems to go out his way to prove that he knows all about N.W.A. and could almost recite every rap song that they wrote by heart, as if trying to show that he/she is all “hip” and “down,” and more than just a square film nerd.

I, on the other hand, proudly admit that I know practically nothing about N.W.A. Yes, sure I’ve heard of them and knew who the members of the group were (though I’d never heard of MC Ren or DJ Yella – those were new to me). And maybe I might have heard one or two of their rap songs, but I was pretty much clueless before I saw the film, therefore a lot of what the film details was new to me, and I found it all pretty fascinating.

Now, of course like every film made about a real person or incident, I’m sure there were some dramatic liberties taken with the story, and there are a few things that happen in the film that never happened in real life, or where distorted in some way. I’ll leave it to you N.W.A. historians to tell me what’s real and what’s made up.

But everything plays in the film as if it really happened, bringing up a whole bunch of questions for me as I watched, such as: “Hey, did that thing really happen at that N.W.A. contest in Detroit?” and “Hey, I didn’t know Ice Cube left the group and recorded his own albums dissing the group” and “Wow, were they really screwed out of all their money like that?” and “Hey, that Suge Knight really is a psychopath isn’t he?”

So I figure, if the film can pass that test, and I suspect that other people have similar tests, then it has to be a hit.

Yes I know. You don’t have to tell me.  Many black women are definitely not going to be happy with the film (a few have already told me that they have no plans in seeing it), and I have read that some black feminists have called for a boycott of the film. But let’s be honest – that’s not going to have any effect on its box office. Name a boycott against a film that did.

And aside from the really strong interest in the film, and Sergio’s rule, another major factor in its favor is that it practically has the field all to itself. There’s really no competition that it’s going up against this month – unless you count “Mission Impossible: Rogue Nation,” but that’s a different type of film for a more general audience.

There is the “Man from U.N.C.L.E.” movie which is going to do zero business, and there is also that “Fantastic Four” movie which is not being screened in advance for the media or the public until 36 hours before the film opens, and all reviews have been embargoed by the studio until opening day. In other words, it’s so bad that they’re trying to contain the damage before word gets out.

So, in other words, there’s nothing major coming out for an entire month after “Compton” is released until mid-Sept. It has the market all by itself for several weeks, so a $40 million opening weekend sounds pretty fair to me. Who knows? It might do even more.

So what’s your prediction?