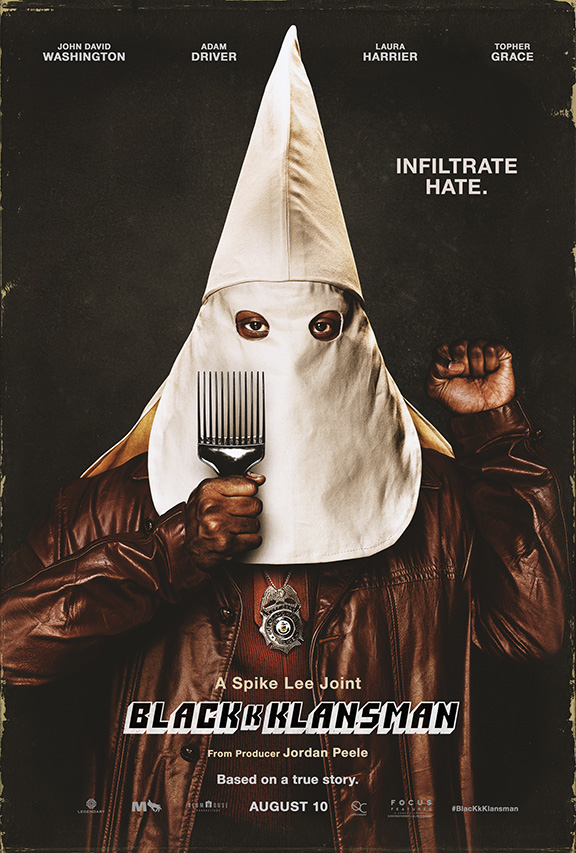 Producer/director/filmmaker Spike Lee has been a voice for the Black community since the beginning of his career. He has never shied away from using film as the medium to highlight all parts of the Black experience in America. A large part of that experience has been dealing with a structure and a system rooted in racism and White supremacy. Insert Spike Lee’s new film, “BlacKkKlansman”.

The period piece, set in the late 1970’s, is based on the true story of Ron Stallworth — an African-American detective who worked with a Jewish police officer to infiltrate their local KKK chapter. Stallworth — who became the first Black detective in the history of the Colorado Springs Police Department — became a card carrying member of the KKK. He did this by corresponding with the KKK via phone and by sending his colleague, a White narcotics detective, in his place for all face-to-face meetings. Stallworth was so convincing that he managed to get in good standing with David Duke, the former Grand Wizard of the KKK The local chapter then voted for him to be their leader. The film, produced by Jordan Peele, stars John David Washington as Ron Stallworth, Adam Driver as Flip Zimmerman (the ‘White’ Ron Stallworth), Topher Grace as David Duke and Laura Harrier as Patrice. “BlacKkKlansman” takes the audience on a rollercoaster ride through the process of seeing the impossible take place.

“BlacKkKlansman” begins with a presidential figure (Alec Baldwin) speaking on camera about the great way of life Americans once had. The Americans he was referring to were WASPs [White Anglo-Saxon Protestants] and their values. This great way of life excluded Black and Brown people–who Baldwin’s character referred to as rapists and murderers among other disparaging adjectives. In many ways, art imitates life in the “BlacKkKlansman”, with the dialogue in the film echoing the actual words and sentiments expressed by our current president, Donald Trump. There were also several tongue-in-cheek statements about how America would never elect a guy like David Duke, which was also a not so subtle reference to our current Commander-in-chief.

“BlacKkKlansman” displayed a stark contrast between Black empowerment groups like the Black Student Union and racist groups like the KKK. The Black Student Union’s catchphrase “All power to all the people” vs. the KKK’s “God Bless White America” showed the difference in mindsets — the difference between true empowerment being inclusive vs. hatred being exclusive. The film also highlighted the fact that there should be some solidarity between Black and Jewish people in the battle against White supremacy. “BlacKkKlansman” highlights the juxtaposition of White women to White male supremacist leaders and the use of White women as unwitting weapons.

As satire, “BlacKkKlansman” walks the line of blaxploitation with an ‘in-your-face’ slice of reality. At times, the pacing of “BlacKkKlansman” is slow, particularly in the beginning as the story builds. There are moments that don’t necessarily move the story forward, but the characters are solid and their respective allegiances force you to choose a side. Spike Lee interjects actual footage of the violent, right wing Charlottesville protests, as well as Donald Trump excusing the inhumanity of it all. The parallels between the obstacles Black people faced in the 1970s and the visual reminders of Charlottesville present day almost acts as a time capsule, calling attention to the realization that we haven’t come as far as many may think. That realization will cause a visceral reaction for most.

One thing is clear; “BlacKkKlansman” will spark dialogue. This film is a very tangible reminder that environments and institutions of hate — when based on principles of White supremacy — were protected in the ‘70s and continue to be protected today in America. Ultimately, the story of Ron Stallworth deserves to be heard and “BlacKkKlansman” certainly gives his story wings. This film also serves as a much-needed opportunity for Americans to have a dialogue based on unfiltered truth. Candid conversations about the history of our country and how it operates currently, be it on the big screen or in a different forum, is the only hope we have for enacting change. “BlacKkKlansman” opens in theaters nationwide on August 10th. Check your local listing for show times.