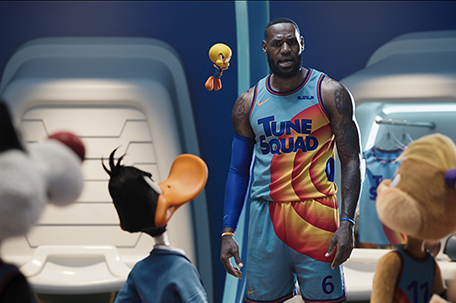 In 1996 when the original “Space Jam” was released, 90s kids were in heaven. Not only did they get to see Michael Jordan, (arguably the greatest basketball player of all time) on the big screen, but they also got to experience him within the wacky world of Looney Tunes. Most of them grew up watching the Looney Tunes get into all kinds of peculiar situations during the Saturday morning cartoon lineup. In the original Space Jam, Bugs Bunny, Daffy, Sylvester, Tweety and the whole gang true to form went on an out of this world adventure… literally. Rogue aliens kidnap Jordan and force him to play in a high-stakes basketball game with the Looney Tunes as his teammates.

In “Space Jam: A New Legacy” James is hyper-focused on basketball and his desire for his son Dom to follow in his footsteps. Dom, however, has a brilliant mind of his own — he’s more interested in designing video games than he is in playing basketball. Tension continues to build as James ignores the incredibly innovative game that Dom created to focus solely on basketball and an upcoming basketball camp.

During a pitch meeting, James is presented with an idea on behalf of Al-G, (a sentient computer program) where people in the real world can insert themselves into classic movie scenarios. James rejects the idea and mayhem ensues when a rogue Al-G pulls James and Dom into the Serververse. Al-G, thirsty for power and recognition, separates father and son and gives James a dire ultimatum… assemble a basketball team, and play in a virtual basketball game before a worldwide audience or never see his son again. James is then catapulted into Toonville to recruit his team. But Bugs Bunny is the only Looney Tune still there, which leads to Bugs and King James traveling through the world of Warner Bros. to find the Looney Tunes characters so many of us know and love.

“Space Jam: A New Legacy” is filled to the brim with WB product placements. There are so many WB characters in plain sight that children and parents could potentially turn it into a game of “Where’s Waldo” in an attempt to spot the characters in the crowd. Looney Tunes characters are interjected in various WB films — the same idea James rejected in the beginning of the film. Audiences see Daffy and Porky alongside Superman in the DC Universe, while Granny and Speedy Gonzales break out the famous frozen moves from the Matrix among other scenarios. After the Looney Tunes team is reunited, Al G tricks Dom into helping him assemble his Goon Squad. The Goon Squad is a mixture of professional athletes with the increased abilities and superpowers that Dom tailors for them in his game. The stakes are raised even higher when Al G threatens the spectators that he pulls in from all over the world, telling them that they will be stuck forever should James and the Looney Tunes lose the battle on the court. By the end of the film, James is able to see that the best way to be a good parent is for parents to allow their children the freedom of being themselves.

“Space Jam: A New Legacy,” like the original, mixes fantasy and whimsy with reality in a way that will be enjoyable for children. For parents that are familiar with the Looney Tunes brand, there are moments they, too, will enjoy — the classic Looney Tunes hijinks that so many of us grew up watching.

As technology continues to evolve, so do the fears that computers are taking over human interaction, careers and that our reliance on technology can sometimes cloud our judgement. Those fears are valid, and that point comes across in the film, be it intentional or otherwise. As an added bonus, the animated characters get a nice makeover. However, where the animated characters get a revamp, there are moments in the film where the acting and the script fall a little bit short. In the moments where the stakes are high and the weight of what’s at stake — i.e., the safety of Dom and the world need to come across —King James struggles to emote. That said, he is very enjoyable to watch and shines as an animated character where he can partake in all the craziness that is the Looney Tunes world.

For the most part, the sequel does what it’s supposed to do — provides fun and an escape to a different world. Overall, it is a fun, light family movie, with ridiculous hi-jinx that the kids will certainly enjoy from both LeBron and the crazy Looney Tunes gang. “Space Jam: A New Legacy” opens in theaters this Friday, July 16. Check your local listings for showtimes.