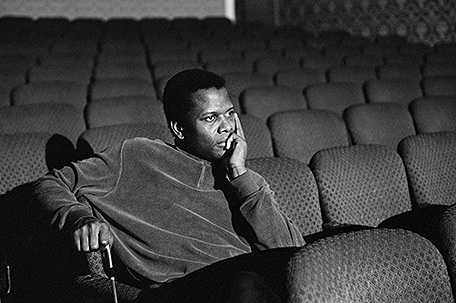 ABOVE PHOTO: Sidney Poitier from the documentary “Sidney.” (Bob Adelman/Apple TV via AP)

Sidney Poitier was not expected to live. He was born two months premature to uneducated tomato farmers in the Caribbean. His father planned to use a shoe box as a makeshift coffin.

Poitier’s rise from that humble origin to become an Oscar-winning box office draw and civil rights figure who remade Hollywood seems almost scripted, almost too good to be true, but such was Poitier, a life well-lived.

The new documentary “Sidney” respectfully traces that life, delivering a portrait of a striver hoping to improve everything he did every day. “I truly, truly try to be better tomorrow than I was today,” he says to the camera.

Written by Jesse James Miller and directed by Reginald Hudlin, “Sidney” is executive produced by Oprah Winfrey — who lent several hours of her own interviews with Poitier — and members of his family. It glows with respect for a man who earned it.

Poitier became the first Black actor to win an Academy Award for best lead performance and the first to be a top box-office draw. He died this year at 94.

For much of the film, a grey-haired Poitier addresses the camera in a grey suit jacket with a pocket square and a white open-necked button-down shirt — flawlessly elegant, as always. Sometimes old interviews are added from a younger Poitier, making it seem as if he is in conversation with himself.

Highlights include the devastating confrontation with racism as a teen in Miami, the fun story of his first encounter with a subway and how a classified ad looking for actors changed his life. “I can be many things here,” he thought. Tossed out of the American Negro Theater for being lousy, he took acting classes and lost his Caribbean accent by buying a radio for $14 and learning to mimic a newsreader he admired.

The filmmakers have a charismatic change-maker as their focus, but credit to them for also exploring when he missed his high ethical standards, as when he had a long affair with Diahann Carroll, triggering a divorce that split the family.

Poitier’s moral compass was stronger than most. Early in his career, he turned down an exploitive part, an unheard of decision at the time. And then after he had made his way to the top and opened the door for other unrepresented actors, he was criticized.

Some called him out for being too accommodating in “The Defiant Ones,” chained and helping a white Tony Curtis, or for loving a white woman in “Guess Who’s Coming to Dinner?” The pioneer became passe as Black militancy grew strength. So Poitier pivoted to directing and producing, still helping others up the ladder.

Other voices are less effective, showing a star-pulling flex but with little connection to the man. Barbra Streisand adds little — “He was like, Wow!′ Movie stars should be, ‘Wow!’” — and we learn that Halle Berry wanted to marry him.

Even Oprah seems a little suspect interviewing herself but she makes it count when she recalls meeting Poitier for the first time at her 42nd birthday, a time in her life when she was being criticized by the Black community for not doing enough, just as Poitier had been.

“It’s difficult when you’re carrying other peoples’ dreams,” he told her. “And so you have to hold on to the dream that is inside yourself and know that if you are true to that, that’s all that matters.”

For those unfamiliar with some of Poitier’s more famous moments, news of a pivotal slap will come as a surprise. Fifty-five years before Will Smith smacked Chris Rock at the Oscars, Poitier’s Detective Virgil Tibbs slapped an actor playing a white plantation owner onscreen in the film “In the Heat of the Night.” It was electrifying, coming in 1967 as the civil rights movement was reaching its heights. Listening to how it profoundly affected future Black stars is powerful.

Another rich vein is revealed in the relationship between Poitier and Belafonte, which one of the former’s children likens to having the dynamic of an old married couple. They bonded, they fought, they reconciled, they once even outran the KKK. There seems almost to be another film here about these two charismatic men.

But let us first celebrate Poitier, a man of impossible dignity and ethics, a man who Lenny Kravitz in the film says “came to this Earth to move it.”

“Sidney,” an Apple TV+ release in select theaters and on Apple TV+, is rated PG-13 for adult themes and racial slurs. Running time: 112 minutes. Three stars out of four.