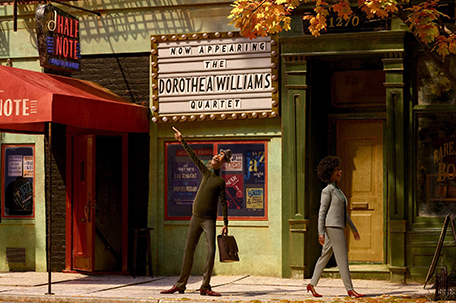 ABOVE PHOTO: Pixar Animation Studios’ all-new feature film “Soul” introduces Joe Gardner (voice of Jamie Foxx) – a middle-school band teacher who gets the chance of a lifetime to play at the best jazz club in town.  (Photo: Pixar Disney)

Pete Docter’s “Soul” features stairway-to-heaven visions of the afterlife, a pre-birth “before” realm where souls are glowing turquoise orbs and an in-between spiritual realm trafficked by some kind of psychedelic pirate. And yet, kind of magically, it’s about “just regular old living.”

Pixar may have started simple with talking toys, but their concepts have grown increasingly elaborate over the years, giving abstract shape to interior consciousness (“Inside Out”), brightening a peopled world of the dead (“Coco”) and conjuring a mythical suburban land with a father’s half-resurrected body (“Onward”). “Soul” is a step further, again: a grand metaphysical whatsit — a mid-life crisis movie, a New York jazz fantasia and a body-swap comedy, all in one.

Part of the fun, of late, with Pixar’s more ambitious movies is following a plate-spinning act that juggles animation whimsy, kids-movie imperatives and the meaning of life in some seemingly impossible combination that nevertheless in the end makes us cry. You can imagine a Pixar Mad Libs coming up with a movie about hamsters in space that’s really about graduating high school, or one with unicorn cousins who learn to cope with trauma.

But part of what’s refreshing about “Soul,” which debuts Friday on Disney+, is its uniqueness. It’s a deliberate and overdue new direction for Pixar. The animation giant’s 23rd film, “Soul” is its first to feature a Black protagonist. Kemp Powers, the screenwriter of the upcoming “One Night in Miami,” is also Pixar’s first African American co-director. The film is lushly set in a sun-dappled Manhattan. You will even hear, for a moment, A Tribe Called Quest playing in the background of a barbershop. For an animation world that has almost always been colored white, this borders on radical. It’s also joyous.

Joe (Jamie Foxx) is a middle-school music teacher who has long pined for his own career as a jazz pianist. On the day his big shot finally comes — a chance to sit in with the revered saxophonist Dorothea Williams (Angela Bassett) and her quartet — a stray step into an open manhole robs him of his dream. With his body laying comatose in a hospital, Joe’s soul lands in a netherworld — and Pixar’s animating ingenuity goes into overdrive. Faced with an escalator to The Great Beyond reminiscent of Powell and Pressburger’s magnificent “A Matter of Life and Death,” Joe runs the other way and drops into The Great Before — a soft, pastel-colored purgatory where nascent souls find their “spark” before plunging to Earth. It’s a rolling, blue-hued land of mentorship, overseen by benevolent figures elegantly outlined in Picasso-like two-dimension.

Not everything is perfect in The Great Before. Some souls struggle to find their spark. Joe, posing as a Swedish psychologist to elude capture, is assigned to mentor number 22 (Tina Fey), a problem child who’s already cycled through everyone from Mother Teresa to Muhammad Ali looking for her spark, her purpose.

It’s the elusiveness of purpose that “Soul” swirls around, tenderly examining what gives life meaning. For some, it might come as easily as the notes that pour out of Dorothea’s sax. (The jazz scenes, curtesy of Jon Batiste, are brilliantly transportive, part of the film’s rich musical life, as scored by Trent Reznor and Atticus Ross.) But even as “Soul” rhapsodizes the beauty of artistic creation, it ponders the value of life for souls of less premeditated determination. “Soul,” a celebration of those less certain of their path in life, is a kind of corollary to Pixar’s “Ratatouille,” a portrait of a very purposeful young artist.

This comes through not just in 22’s journey but Joe’s too, as he tries desperately to return to his life and realize his long-held ambition. In the end, Joe may remind some of Burt Lancaster’s Archibald “Moonlight” Graham in “Field of Dreams,” another who returns from beyond to get another swing at an unrealized dream — and in doing so only realizes how good he had it, in the first place.

But the meaning of “Soul” also comes through in the pointillist realism of Pixar. As delightful as its imagery of the afterlife is, the best stuff might be back on Earth. It would spoil things to say too much, but Joe and 22 land back in New York in a body-swap twist that includes a therapy cat. Not all of this works, in the end; “Soul” is seeking such a high plane of sublimity that it’s sometimes forcing Pixar-styled transcendence a little too much.

But the landscapes of “Soul” are full of life. City streets teem with it. This is, undoubtedly, the best the Manhattan subway has ever looked. Little joys — pepperoni pizza, lollipops, helicopter seeds spiraling to the ground — steadily accumulate. And “Soul” turns out to be not an exploration of the afterlife but a wondrous whirligig of daily life.

“Soul,” a Walt Disney Co. release, is rated PG by the Motion Picture Association of America for thematic elements and some language. Running time: 100 minutes. Three and a half stars out of four.