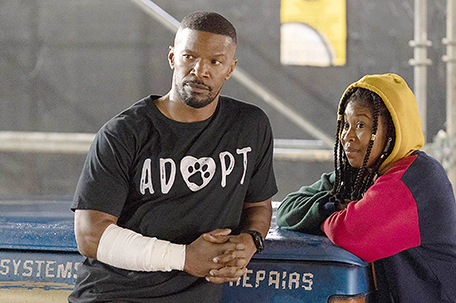 ABOVE PHOTO: Jamie Foxx, left, and Dominique Fishback in a scene from “Project Power.”  (Skip Bolen/Netflix via AP)

Imagine taking a little pill that could make you strong and vibrant, one that basically unlocks your yearning potential. No, not that pill. Get your mind out of the gutter.

The pill in Netflix’s “Project Power” gives you a superpower — invisibility, bulletproof, elastic body, fiery skin. But there are two catches: The effect lasts for just 5 minutes. And instant death is a possible side effect.

Jamie Foxx, Joseph Gordon-Levitt and Dominique Fishback star in this utterly satisfying, stylish R-rated crime thriller that gets extra credit for adding a dash of social critique along with its dazzling special effects.

The pills here are glowing gelcaps that you twist to activate and swallow. It’s creators say their product — called Power — can change the world and lots of ruthless people want to get their hands on it, as you would imagine.

But first they need a place to test the unpredictable pills on an unsuspecting populace and one place turns out to be New Orleans — bringing together our motley group of three heroes to fight against a shadowy conspiracy.

Foxx plays a disgruntled former military officer who has a personal reason fueling his desire to upend the drug’s distribution. “I need to get to the top of the food chain,” he says.

Gordon-Levitt plays a cop not afraid to take the pill if it helps him catch bad guys. He resembles Mark Walberg, swaggering around in a Saints’ Steve Gleason jersey with a gun at his hip and a badge on a chain around his neck. “Maybe we can do some good. Isn’t that our job?” he asks a fellow cop.

Fishback is a high school student by day and a Power dealer at night — but only to raise enough cash to take care of her ailing mom. She’s also a fierce rap star, if only she believed in herself. (Shout-out to rapper Chika for supplying Fishback’s raps and don’t click away before hearing the two women perform “My Power” over the credits).

The three are up against a small army led by rich, faintly accented drug kingpins with glamorous jets and designer clothes whose dialogue seems ripped from a “Miami Vice” episode. “The money is here if the product lives up to its reputation,” one says.

Newcomer Mattson Tomlin’s script is slightly derivative — mixing some “8 Mile” with “Limitless” — but give him credit for making plenty of jokes about other movies, baking in discussion of social power structures and for some frank addressing of race relations.

At one point Fox’s character looks at the schoolkid played by Fishback and tells her: “You’re young. You’re Black. You’re a woman. The system is designed to swallow you whole.”

The film’s coherence falls apart at the end, but the performances from our three heroes are great, with Fox and Gordon-Levitt elevating the material with real pathos. Fishback manages to pull off being a tough and smart high schooler even though she’s almost 30.

There’s a brilliant fight sequence shot from inside a protective chamber, a very-hard-to-pull-off comedic scene with Gordon-Levitt in a towel that works, and, in a first, a brutal death via ice sculpture. That’s cold.

“Project Power” nicely mixes elements of sci-fi and crime thriller to create a cool trip with a wink, set against a soundtrack that includes 2 Chainz, Nipsey Hussle and Curtis Mayfield.

In one scene, Fishback’s teen hopes to keep joining forces with Fox’s character, saying they’re like Batman and Robin. His response is a mind-blower: “We ain’t Batman and Robin. That’s a movie. This is real life.”

Wait, what? Actually, don’t ask a lot of questions. Just enjoy this pill going down.