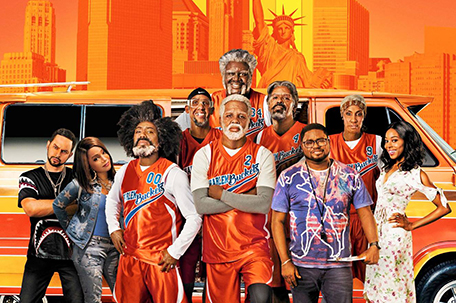 For a few shining minutes, “Uncle Drew” is the movie it surely intended to be: funny and clever, quick and snappy, and most of all, fun — all infused with love for the great sport of basketball.

Unfortunately, those minutes come during the closing credits, a sequence entertaining enough to be its own viral video.

But wait — that’s what “Uncle Drew” originally was, anyway: a series of web videos from a Pepsi ad campaign starring NBA great Kyrie Irving as a white-haired senior citizen who shows up on a playground court and blows all the “youngblood” hotshots away. Combining Irving’s talent with the satisfying element of age trumping youthful hubris, they couldn’t lose.

It’s perhaps not surprising that someone sought to make it into a full-length movie — and why not? Alas, the resulting film, made in association with Pepsi and directed by Charles Stone III, falls into a disappointingly formulaic lull for large stretches, squeezing all spontaneity from the proceedings. Don’t fault the talented cast, which includes a squad of hard-working NBA luminaries in heavy aging makeup, and comedy stars including the delightful Tiffany Haddish and Lil Rel Howery, so memorable in “Get Out.” Fault the unimaginative script they’ve been given.

The premise: Dax (Howery), is a downtrodden Foot Locker employee trying to make a buck. As a teen, he was a talented player, but quit altogether when he missed a crucial game-winning shot, and lost his nerve. He’s also an orphan, who never had a sense of family. (Can you start writing the ending of the script right now? Of course.)

Dax is also an amateur coach hustling to get a team ready for a tournament at Harlem’s storied Rucker Park (where many NBA greats have played), and win a hefty cash prize. But his nemesis, Mookie, has different ideas.

Mookie — a nasty-funny Nick Kroll, more nasty than funny here — steals Dax’s team from under him, including his young star Casper (Aaron Gordon of the Orlando Magic.) It hardly comes as a surprise when Mookie steals Jess, Dax’s girlfriend, too. Jess (an underused Haddish) boots Dax from their apartment, and when he hits the street with a suitcase, she calls him back: she needs the suitcase. He re-emerges with a garbage bag. Ouch.

Locals at the barber shop suggest Dax, now teamless, go find Uncle Drew. And the old man agrees to play — on condition that he choose his own teammates. Road trip! The two set out to gather up a team of Drew’s old cohorts — emphasis on old. Dax is initially uncertain, but as Drew likes to say: “You don’t stop playing because you get old. You get old because you stop playing.”

First stop: the Preacher, aka Chris Webber, hamming it up quite impressively as an actual preacher who sounds something like James Brown. Preacher says yes, but his wife, Betty Lou (WNBA great Lisa Leslie) is not happy; as her guy makes a getaway in Drew’s van, she follows with a baseball bat. (The women in the film, unfortunately, are often either angry, batty, or mere eye candy. At least Leslie will eventually get to show her stuff.)

The group then recruits Lights (Reggie Miller); the joke is that he’s legally blind, but believes in his ability to hit any shot. At an old-age home, they bring in Boots (Nate Robinson), who’s been sitting silently in a wheelchair for years. But he only needs one thing to cure all that. Do we need to tell you what it is?

Finally, we get to towering Shaquille O’Neal, game as always. Shaq’s Big Fella, now a Kung Fu instructor, has an axe to grind against Drew, who will have to address this and other emotional issues if this underdog team will ever coalesce enough to win.

Teamwork. Friendship. Family. Playing for the game’s sake, not money. All these themes come together in a warm-hearted but highly predictable way.

It’s undeniably fun to watch these guys do their thing under gallons of makeup, and the promising Lowery does what he can with the corny script — including one funny “Get Out” reference which we won’t spoil for you.

As for Haddish, she’s a treasure, but has little to do here, and she’s funniest and loosest when we’re not even guaranteed to be watching: during those closing credits. Make sure to stick around.