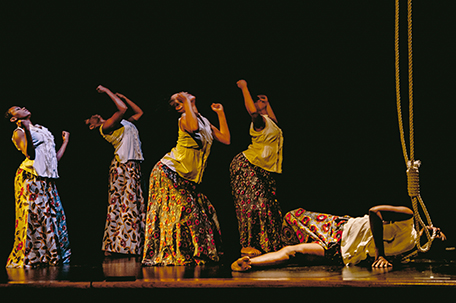 ABOVE PHOTO:  Scenes from the Native Portals dance performance at Intercultural Journeys in University City.

The late, great Nina Simone once said that an artist’s duty is to reflect the times, and Lela Aisha Jones and her company Flyground reflected the brutal history of African Americans and the residual manifestation of years of racism in her two-part movement performance series entitled Native Portals on April 23 and April 24.

Native Portals, the first dance performance presented by Intercultural Journeys in University City, included an excerpt from Jones’ 2012 work Love & Lynching and the premiere of Release Mourning Clearing as the culmination of its 2015-2016 season, The Artistry of Identity and Transformation.

Jones, an Artist-in-Residence at the Community Education Center and 2013 Dance USA Philadelphia Rocky Awardee, is a Philadelphia-based activist who uses dance as a medium to promote social change and African diasporic awareness.

“Native Portals captures reflections on lived experiences and how they manifest in memories and dreams through narratives that are cyclic, non-linear, and abstract,” Jones said. “This is the aim of our bodies in performance as witnesses and living archives of our cultural climate.”

Love & Lynching is a theatrical performance about instances of lynching and the adaptation of American life for African peoples. The dancers used vocalization, storytelling and African diasporic movement phrases performances to tell this painful story.

The piece lacked a sense of the subtle, watered-down intent that oftentimes accompanies racial discourse, whether artistic or conversational.  With a noose hanging from the ceiling center stage, and an American flag positioned towards the right side of the stage, Jones and four dancers entered the stage resembling women in African countries who carrying fruit and vegetables in woven baskets above their heads.

Walking past the American flag, the dancers’ bodies moved through historical time and space from the period of Enslavement to Reconstruction and through Segregation as the audience heard anecdotal, multigenerational accounts of knowing someone who was lynched, and learning about lynching in school and in African American Studies courses in college. The dancers moved in unison around the stage, walking and using the noose to demonstrate the narration and the horrific reality of the practice of lynching as Jones also vocalized in harmony with a live Jazz saxophonist and a vocalist.

In addition to the noose being used in the literal sense, the dancers also used the noose as a jump rope as they playfully recited a popular, racist rhyme: Eenie, meenie, miney, mo/Catch a (n-word) by the toe/If he hollers let him go/Eenie, meenie, miney, mo. This symbolizing the way in which lynching was normalized by White Americans as a celebratory event and spectacle that kids often witnessed.

Jones’ solo, performed as an anecdote of a young woman recounting the shock she felt when she learned that women and girls were also lynched and a live saxophonist, featured the dancer’s body entangled in the noose and sweeping and swaying on stage as the female narrator recalls a post card she once saw of a Black woman hanging from a tree. Jones’ torso moved in a staccato, choppy matter mimicking the contortions and distorted figure of a victim of a lynching. The other four dancers carried flowers and memorialized the fallen dancer.

After a brief pause to remove the hanging noose and usher in the continuation of the performance with Release Mourning Clearing, the dancers appeared on the stage in a contemporary, African-inspired costume with pants. The costume symbolized the energy of a new era, similar to the way in which African Americans during the Black Power Movement of the 1970s embraced traditional African garb and culture.

The second half of Native Portals moved faster, with more African and Modern dance phrases and less theatrical interpretations. The dancers moved through the phases of releasing the pain of the past, mourning the African American lives lost through lynching and the excessive murders of African Americans at the hands of the police. While the delivery of the second half included costume changes, loud vocalization of urban vernacular like “Yo!” to call attention to the presence of Blackness may have seemed unrelated and choppy, the noose dangling center stage in the first half was the metaphorical that connected the different aspects of Release Mourning Clearing.

Jones and dancers performed African and Modern dance movements with rhythmic stomping, torso undulations and turns, depicting the labor and complicated dance of existence African Americans are forced to perform in the present day despite the fact that the nation’s first Black president has served two consecutive terms.

Alluding to a popular, yet controversial idea that integration caused the degradation of the sense of community among African Americans with an anecdote of a grandfather, recorded and told by Jones, the dancers grapple with a life in and of color with each other in movement phrases that move in and out of unison and canons.

Jones is the lead centralizer/organizer of Dancing For Justice Philadelphia, an initiative in Philadelphia that seeks to unify the dance community in support of the Black Lives Matter movement.

Touching upon the struggle of the Black Lives Matter movement and the rage associated with Baltimore City protestors after the death of Freddie Gray, the dancers traveled through the stage in the “Hands Up, Don’t Shoot” position to the sound of a heated news broadcast between community organizers and a news anchor.

While Jones’ work Native Portals was a strong dose of history and reality to the multiracial audience, it left the audience pondering about the next phase of the “clearing” process.