Review: Good performance by Andre Benjamin isn’t enough to bolster Hendrix biopic ‘All Is By My Side’ 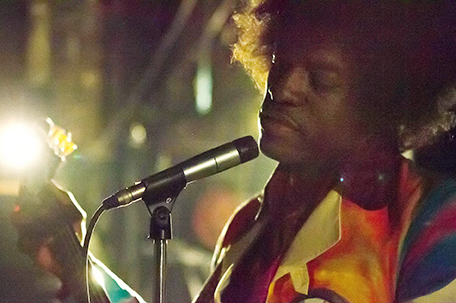 ABOVE PHOTO:  Andre Benjamin in a scene from All Is By My Side.

A little over a decade ago, VH1 premiered one of its many mediocre television biopics, Hendrix. Playing well against type, Wood Harris starred as the iconic guitarist, alongside Vivica A. Fox (as girlfriend/groupie Faye Pridgeon), and Billy Zane. A general overview of Hendrix’s life, the film chronicled his time playing with black artists like Little Richard, his period as a recording artist in London, his breakthrough performance at the legendary Monterey Pop Festival in 1967, and his untimely death at the age of 27. It had all the hallmarks of most rock ‘n roll biopics: the tough childhood, the discovery of genius, the hit single, the hard partying, the groupies, the hangers-on, the drug problems, the fall from grace. But it was missing something, one major element. The music.

Getting music rights has been an uphill battle in many a musical biopic, and last year, with the announcement that a new Hendrix movie called All is By My Side was set to begin production, getting rights to the rocker’s extensive discography once again became an obstacle for filmmakers. Hendrix’s estate withdrew all support for the movie, and barred writer-director John Ridley (who paradoxically also wrote 12 Years a Slave and Undercover Brother) from using seminal Hendrix songs like ‘Purple Haze’, ‘The Wind Cries Mary’ and the ‘Hey Joe’ cover in the movie. Ridley, determined to tell his version of the Hendrix story, sidestepped this slight inconvenience by crafting a story set specifically before the debut of “Are You Experienced.”

Andre Benjamin plays Hendrix, discovered by Keith Richards’ girlfriend Linda Keith (Imogen Poots) while playing backup guitar at New York’s Cheetah Club. The two strike up a romantically-tinged friendship, as Linda works tirelessly at helping him find a manger and get a record deal. Eventually, under the management of former Animals member Chas Chandler (Andrew Buckley), Hendrix moves to London, shacks up with feisty party girl Kathy Etchingham (Hayley Atwell), and begins his journey towards starting The Jimi Hendrix Experience and becoming one of if not the greatest guitar players of all time.

That’s a straightforward summary, but this is anything but a straightforward, VH1-esque approach to the Hendrix story. Benjamin, in contrast to Wood Harris’s well-intentioned but slightly caricaturistic performance, plays Jimi with an ease, a subtlety, a musicality that is easily identifiable in any interview of the rocker when he was alive. It’s a miracle that he’s able to get anything out of the character at all, with a script that gives him very little to work with in the way of dialogue, as Ridley plays up the more shy, more vague qualities of the real life Hendrix.

And while music does abound throughout the narrative, with covers of Muddy Waters, the Beatles, and the Rolling Stones, this is not a movie about Hendrix and his relationship with music. If anything, its about Hendrix’s relationships with other people, specifically the women in his life. There were many, but here Ridley chooses to focus on Keith, Etchingham, and a character named Ida (Ruth Negga), most likely based on real-life groupie Devon Wilson. Ridley plays up the link to Linda Keith, spending too much time setting up and exploring a wearyingly boring almost love-affair between her and Hendrix, and crediting her for influencing his style, his music, even the way he wore his hair. Whether or not any or all of this was actually the case is irrelevant. That their story ultimately goes nowhere interesting, though, makes the time spent with her all the more perplexing.

To its credit, the movie is also unafraid of complicating its portrait of the artist by also presenting some of the (allegedly) unsavory elements of Hendrix’s personality. His image as a sensitive rock god is skewed with several scenes in which he is an insanely jealous, possessive, and abusive boyfriend toward Etchingham. And, very much mirroring the way Hendrix is written throughout, the film is relatively indifferent on Hendrix’s issues with women, or his issues with race, or even his issues with his own difficult background.

Disjointed and non-linear in style, from time to time the movie employs weird filters and grainy stock footage and newsreels of pop culture from the time – Twiggy, hippies, etc. These feel more like gimmicks than necessary additions to the story. Indeed, rather than telling a story, any story about Hendrix, what’s happening here is maybe an attempt at capturing the spirit of Hendrix. It doesn’t work. When it ends, rather abruptly, we’re left with only the vaguest sense of what, exactly, is trying to be conveyed. What’s left is a good performance by Benjamin, some interesting set pieces, and the general feeling that something, still, is missing.