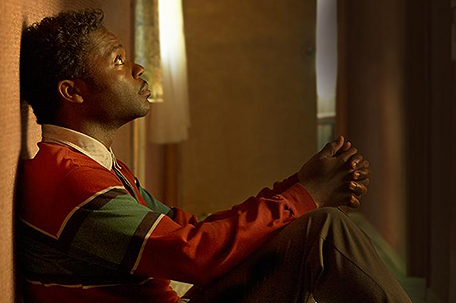 By Aramide A Tinubu

It takes a great deal of courage to embark on a solo performance; a one-man cast with a singular location. It’s such a vulnerable experience for the actor, giving himself over the character and that character’s experiences entirely.  Often it doesn’t work; the audience is unable to remain enamored with the story. However, when it does work, when the actor becomes infused with the character and the story, the results are breathtaking.  In HBO’s “Nightingale,” David Oyelowo gives the best performance of his career as Peter Snowden, a man quickly and violently descending into madness.

Director Elliott Lester requires his audience to do the work of piecing Peter’s story together for themselves. Through Peter’s manic, though at times humorous monologues, we began to get a fuller picture of his life, and the circumstances that have led him to this particular moment in time.  Set in modern-day Minneapolis, Peter is desperately trying to step into the 21st century though his surroundings have stalled him. He lives with his elderly mother and everything from the drapery on the windows, to the clothing in the closets are relics from the 1960’s.  In one of the most striking scenes of the film, Peter enters the house and begins un-boxing a new iPhone.  He kneels before it, worshiping its sleek design as if praying at the feet of God himself.  It’s obvious that he’s been waiting a long time for this moment; he new device is so unlike the house phone that the audience had grown accustomed to seeing him with. Though Peter is in many ways stuck in a past time, his story is one for this century.  He documents his days through a series of vlogs, which he posts on the Internet. When he’s not on the phone, he speaks to his viewers, his mother, to God or to himself.

The film certainly isn’t light, though the sun often beams in through the windows of the house; I was immediately reminded of Alfred Hitchcock’s Psycho. Peter and his mother have a tumultuous relationship. Though he’s rebelled against her in some ways, Christian practices are ingrained in Peter’s day- to day routine. A figurine of Jesus on the cross holds a prominent place is the house. He prays before meals, and talks to God on a regular basis. He’s also named his tropical fish Adam and Eve. (Perhaps a witty play on his own sexuality.)

What’s striking about “Nightingale” is its willingness to shed light on what often goes unspoken about in the African American community. Though his disorder is never explicitly stated in the film, Peter’s manic episodes and flighty behavior are clear indications of mental illness.  He’s in love with someone who won’t take his phone calls, and he leaves message after message though they go unanswered. He opens his mother’s mail, and makes up outlandish stories about her to church members and friends. He speaks on the phone to his sister and his mother’s friends though we never see or hear them on screen.

As the audience dives deeper into Peter’s mind, it becomes obvious that he’s experienced some childhood trauma; possibly further exacerbated by mother’s super Christian faith and his time spent in the armed forces.  He seems stalled in many ways, oblivious to social cues and finances. Peter’s story is a sad one, a tale of neglect, queerness and faith. More than anything it’s a portrait of a man’s desire for love and companionship in a world where he is devastatingly lonely.

Check your local cable guide for rebroadcasts of “Nightingale” on HBO.

Aramide A Tinubu has her Master’s in Film Studies from Columbia University. She wrote her thesis on Black Girlhood and Parental Loss in Contemporary Black American Cinema. She’s a cinephile, bookworm, blogger, and NYU + Columbia University alum. You can read her blog at: www.chocolategirlinthecity.com or tweet her @midnightrami

Keith David of “The Princess and the Frog;” face-time with the man behind the famous voice