Review: Black, white and shades of gray in superb ‘Passing’ 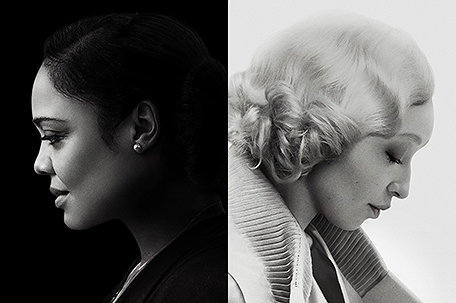 Rarely have the hues of black and white, cinematographically speaking, looked so beautifully lush as in “Passing,” the hugely impressive directorial debut of actor Rebecca Hall.

But at its core, this film is about shades of gray.

Which is to say, motivations, desires and ambitions are even more layered and textured than the visuals in this quietly compelling film, which takes place in Prohibition-era New York and explores ideas of race, identity, and the toxic ripples of a painful lie.

Adapted by Hall from the 1929 Nella Larsen novel of the same name, “Passing” looks at two sides of the racial divide through a pair of women, childhood friends who have a chance meeting years later. The women, played by the extraordinary duo of Ruth Negga and Tessa Thompson, are Black, but they have made drastically different choices: One lives as Black, the other is “passing” as white.

The tale is of deep significance to director Hall: her own American grandfather was Black but passed for many years as white, she says. She grew up in Britain and never knew him personally – he died when her mother was a teenager – but his story has nonetheless clearly had an impact.

We first meet Irene (Thompson), a doctor’s wife and mother of two living a comfortable upper-middle class existence in Harlem, shopping on a sweltering summer day in midtown. Clad in a filmy summer dress and gauzy hat (the costumes by Marci Rodgers are wonderful, especially those ’20s hats), she appears to use the hat’s brim as a shield, eyes downcast so other patrons — all white — won’t look too closely.

Escaping the brutal heat in a hotel tearoom, she sees a prosperous white couple enter, visiting from Chicago. After the husband leaves, his wife, sporting a chic blonde bob, trains her eyes on Irene. She says she knows her. Irene says she must be mistaken, but the woman’s familiar laugh reminds her: This is Clare, a childhood friend from Harlem.

The two get to talking, and Irene boldly asks whether Clare’s husband knows she is Black. He does not. Up in Clare’s suite, she explains how she made her choice: It’s wonderful to have money. In fact, she says, “it’s entirely worth the price.” That “price” includes having prayed for nine months of pregnancy that her daughter would turn out light-skinned (she did), so she could keep her ruse going. Still, “I have everything I ever wanted,” Clare says.

Then husband John (Alexander Skarsgard, in another villain role) arrives back in the room. Turns out, he’s an odious racist. He calls Clare a shocking nickname — a private joke — and denigrates all Black people. As Irene makes a hasty exit, Clare looks out the door with longing, as if to say, “Please take me with you.”

Summer turns to autumn (Hall and cinematographer Eduard Grau do a stunning job of evoking changing seasons without the use of color), and Irene has been ignoring letters from Clare, who one day simply turns up on the doorstep, so eager is she to be part of Irene’s life.

At first standoffish, Irene relents — she has feelings for Clare that she herself doesn’t fully understand — and soon, Clare is accompanying Irene and her doctor husband Brian (André Holland, also excellent) to Irene’s splashy charity ball, reveling in the opportunity to dance and laugh with Black people. She’s desperate for this connection; the fear that her husband might find out seems more present to Irene than to Clare.

That ball scene is terrific, with its joyous dancing and sparkly frocks. Here and elsewhere, jazz music by Devonté Hynes provides a wonderfully evocative soundtrack to what is, for Clare, a headlong descent into danger, ending with one of the more disturbing (and yet starkly beautiful) endings you’ll see this year.

Negga is heartbreaking as a woman who seems to recognize, despite fun-loving appearances, that time is running out on her ruse. And Thompson is riveting as a woman whose own life, while truer and happier than Clare’s, is not without struggles, longings, and contradictions.

For example: Irene refuses to let Brian teach their boys about the perils of being Black in America — there’s been a lynching in Arkansas, and he feels the boys should know. For her, silence is the less painful option.

Irene also has feelings for Clare that seem to run deeper than friendship. And her own complicated sentiments about race and class identity play out in a relationship with the household maid.

Some of these complexities, Irene is aware of. Others seem beneath the surface. But when she gazes at a packed dance floor and comments to a friend that “we’re all of us passing for something or other, aren’t we,” one gets the feeling she may as well be looking in a mirror.

“Passing,” a Netflix release, has been rated PG-13 by the Motion Picture Association of America “for thematic material, some racial slurs and smoking.” Running time: 98 minutes. Three and a half stars out of four.