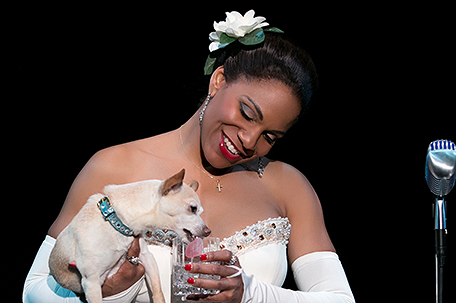 NEW YORK — One of the supreme honors this Broadway season is to go to Circle in the Square, close your eyes and hear a ghost.

Five-time Tony Award winner Audra McDonald in her new show has somehow summoned the feisty, proud and unbowed spirit of Billie Holiday, who died of cirrhosis of the liver in 1959. If a voice has DNA, McDonald has cracked the code for Lady Day’s.

In the evocative and touching “Lady Day at Emerson’s Bar & Grill,” which opened Sunday, McDonald nails Holiday’s reedy, back-of-the-throat voice and her laconic style as she performs about a dozen of Holiday’s best known songs, including “God Bless the Child,” ‘’What a Little Moonlight Can Do,” and “Strange Fruit.”

The inside of the theater has been transformed into a south Philadelphia bar, complete with special tables arranged in a semicircle on the stage itself. A three piece band, a few disco balls and simple projections of photos or musical instruments are all this incantation needs.

The 90-minute show was inspired by a concert Holiday gave in March 1959, about three months before she died. She was drinking heavily and slurred her words. Only about seven people were in the audience. Clearly, one of the world’s greatest vocalists had fallen hard, a drug felon who had been imprisoned and was unable to get a cabaret license in New York.

Playwright Lanie Robertson was so moved by a friend’s description of the night that he wrote “Lady Day at Emerson’s Bar & Grill,” which has songs punctuated by Holiday sharing stories while getting increasingly sodden.

It’s sad without being maudlin, a history lesson without being preachy. It’s earthy and seemingly honest. Since her death, Billie Holiday, who was raped and mistreated and jailed, has become a siren for singers, her tortured life and vocals too rich too pass up. McDonald does honor to her troubled spirit.

No matter how good the acting and singing, there are a few quirks. The show comes to a halt three songs from the end when Holiday disappears into her dressing room to shoot heroin. It’s the natural time for a break but this show has no intermission, so people are left a little bewildered before McDonald reappears with a little dog to end the performance.

It all starts with a jazz combo playing until McDonald shows up, her hair swept back and wearing a white Emilio Sosa strapless gown embellished with beads and long white gloves. She quickly finds a cocktail and begins her set, going from stool to the patrons’ tables for a cigarette and even behind the bar to make another drink.

She banters with her piano player, played by Shelton Becton, who bravely tries to manage Holiday’s unpredictability by picking songs and moving things along. Good luck with that. “I got to sing the way I feel,” she tells us. The script has Holiday offer revealing monologues disguised as show patter, jokes and reminiscences. McDonald delivers with a knowing sneer.

As for the singing, it’s a testament to McDonald, who has one of the strongest voices in musical theater, that she molds hers to fit Holiday’s sound, whether it’s in a subdued “Crazy He Calls Me” or a sassy “Baby Doll.” She manages to capture that smoky, peanut-buttery, sometimes staccato delivery. It’s haunting. Close your eyes and Lady Day is back.