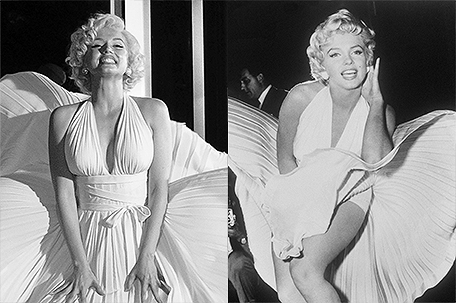 ABOVE PHOTO: This combination of photos shows Ana de Armas as Marilyn Monroe in a scene from “Blonde,” left, and Marilyn Monroe posing on a subway grate while filming “The Seven Year Itch” in New York on Sept. 9, 1954. (Netflix via AP, left, AP Photo/Matty Zimmerman)

What a dream it must be to be Marilyn Monroe, a starstruck assistant tells her. “Everyone would give their right arm to be you!”

And we cringe, as we’ll do many times during Andrew Dominik’s brutal, bruising and often beautiful “Blonde,” starring a heartbreaking Ana de Armas. This time, it’s because we already know that Norma Jeane, the real person underneath, is giving so much more than her right arm to be Marilyn. An arm would be getting off easy. She’s giving her body, her sanity, her dignity, her health and probably her very soul to be Marilyn.

There’s a lot that “Blonde,” written and directed by Dominik with some stunning cinematography by Chayse Irvin, is. Let’s first clarify what it isn’t.

It is not a biopic, not in a familiar sense. It is not chronological, nor an attempt at a complete account. Most crucially, it’s not factual — it’s based on a novel, “Blonde” by Joyce Carol Oates.

And as for the performance at its core — de Armas’ committed, fearless, leap of faith of a performance — well, it’s not an imitation. And so, the complaints circulating about her accent, saying her native Cuban inflection sometimes peeks through, are absurd and irrelevant. De Armas digs so deep to play Marilyn, she could be speaking ancient Greek and it wouldn’t affect the emotional truth she finds here.

What “Blonde” IS is ambitious. Far-reaching, at times perhaps too far. And frequently gorgeous, especially in expertly rendered scenes of old-fashioned Hollywood glitz, mainly in black-and-white — the endless flashbulbs popping (and sounding like gunshots) on the red carpet, the fans ogling, their faces sometimes distorted by lust. There are wonderful recreations of scenes from movies like “Gentlemen Prefer Blondes” and “The Seven Year Itch.”

Less convincing are the moments when we see sperm traveling toward an egg to indicate pregnancy, or a fetus that talks reprovingly to its future mother. Subtlety is not a goal here. A yet thornier question involves the fine line between displaying the horrific exploitation of a character and contributing to that exploitation. As with many works of art, even as skillful as this, there’s no easy answer, and different moments cut different ways.

We begin at the beginning — and an awful beginning it is. Young Norma Jeane (an affecting Lily Fisher) lives alone with her mother (Julianne Nicholson, superb and terrifying) who’s slowly descending into madness. On her birthday, her mother shows the little girl a picture of a handsome man who, she says, was her father. The girl will ache for him from that day forward. Life is not safe with her mother, and when the woman finally has a total breakdown (the mother-daughter scenes are traumatic) Norma Jeane soon ends up at an orphanage.

Flash forward to adult Marilyn, showing up for a big audition with a studio head — who rapes her. Later, when asked by future husband Joe DiMaggio how she got started in movies, her mind goes straight to the rape. Outwardly, she will say only, with hollow eyes: “I guess I was discovered.”

DiMaggio, the retired baseball legend (an excellent Bobby Cannavale), promises Marilyn a decent, respectable life but is consumed by jealousy. He instructs the wife who calls him “Daddy” to do movies where she isn’t so sexy. That doesn’t quite work when “The Seven Year Itch” requires her to stand on the subway grate and have her white dress billow up around her waist. Dominik recreates this famous scene beautifully and shows DiMaggio smoldering with rage while watching the shooting, amid ogling fans.

Like Cannavale, Adrien Brody is wonderfully cast as Marilyn’s next husband, playwright Arthur Miller, a cerebral man who is amazed at her actual intellect — she reads Chekhov! — and offers what she hopes will be a stable life in Connecticut. She gets pregnant but tragedy strikes again. Soon, Marilyn will be hitting the pills, the bottles, and the bottles of pills.

Then, of course, there is JFK. We don’t see the famous “Happy Birthday Mr. President” performance. But in 1962 (the year of her actual death) Marilyn is whisked by the president’s handlers to a hotel room, and the film never seems quite so depressing as in the sordid task that awaits her, presaged in her earlier, plaintive question to his men: “Am I room service?”

It’s probable this scene explains the film’s NC-17 rating. In any case it encapsulates the indignity that accompanied Norma Jeane’s transformation into one of the enduring figures of 20th century pop culture. If it was Marilyn that initially saved Norma Jeane, Dominik is saying, it was also Marilyn that overwhelmed her, suffocated her, and probably killed her.

“Blonde,” a Netflix release, has been rated NC-17 by the Motion Picture Association of America for “some sexual content.” Running time: 166 minutes. Three stars out of four.