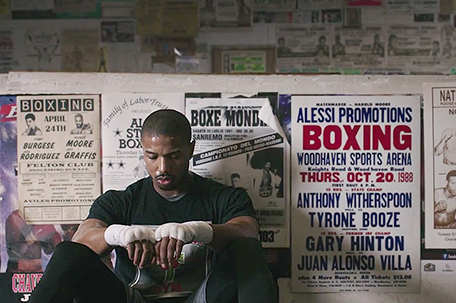 ABOVE PHOTO:  Michael B. Jordan in Creed.

Within the first five minutes you can usually tell if you’re going to want to watch a movie–this is film criticism 101.  Before the opening credits were even presented, a vignette flashed on the screen to pull the viewer into writer/director Ryan Coogler’s (Fruitvale Station) newest crack on a tale as old as the cobblestones in Germantown—Creed, a Rocky franchise spinoff.

Written by Ryan Coogler and Aaron Covington, the latest installment of the Rocky franchise starts in LA with Adonis Johnson, (Michael B. Jordan) a pre-pubescent young man faced with the task of battling his whole life to find a place.  Insert the maternal guidance of Mary Anne Creed, (Phylicia Rashad) and it seems as if the child’s dueling days are behind him.  Flash forward to a grown-up Adonis, who wants to pursue a career in boxing, similar to his famous father Apollo Creed.  This change in career paths makes him decide to move to the city in which his Pops was reared—Philadelphia PA.

This is where we get our first glimpse of the notorious Rocky Balboa, (Sylvester Stallone) well past his boxing prime.  Rocky encourages Adonis not to be a stranger, and he very much takes his advice to heart, pestering the legend to train him.

Along the way, he finds a love interest in neighbor Bianca, (Tessa Thompson) an aspiring musician with a knack for music production (as well as a gross mispronunciation of slang “jawn,”) and he comes to learn a lot about Philadelphia, the art of boxing, being a champion, and the validity of relationships.

There was so much Philly pride thrown into 133 minutes that Mayor Michael Nutter proclaimed November 25th Creed Day in the city, the opening day of the flick.  From the exquisite camera lens of cinematographer Maryse Alberti shots of the city skyline glittering in all its glory, the Market Frankfort El, Front Street Gym, Max’s and the Electric Factory dazzle city dwellers, and the mood is so infectious!  There’s even a motivational portion where Adonis does the famous running sequence, except it’s revamped with dirt bikes and four wheelers executed so brilliantly, we almost forget they’re illegal.  The research put into place to learn the heartbeat of the city was truly felt throughout each scene and sequence in this film.  Director Ryan Coogler is proving to have a real eye for interpreting a city’s vibrancy, just take a look at him and Michael B. navigate the Bay Area in Fruitvale Station.

Creed is a film that will capture the attention of all Rocky fans.  The writing is smart, the storyline is one we are somewhat familiar of but it’s given a 2015 facelift, and the music and light hearted spirit but sheer determination to overcome the odds make this movie one to be cherished in the Rocky franchise.  Take your whole family to the theaters to catch this one; it’s definitely an Oscar contender.