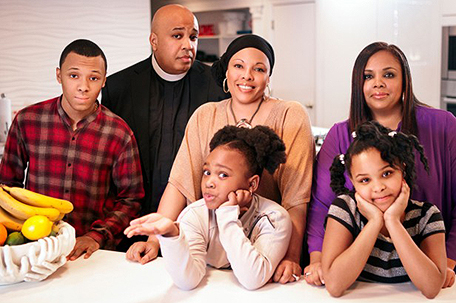 NEW YORK – Rev Run, the iconic musician and seminal hip-hop front man of Run-D.M.C, and Justine Simmons continue their tradition of weekly Sunday dinners with the family, in season three of “Rev Run’s Sunday Suppers,” premiering Wednesday, January 27th at 10pm ET/7pm PT on Cooking Channel. Over 13 episodes, Rev and Justine use simple, heartfelt recipes to lure the kids back to the house for the Simmons’ Sunday dinner, to show that the perfect family meal isn’t just about the food, it’s about who is sitting at the table to share it!

In the premiere episode, Justine wants to recreate traditional English high tea, from flaky scones with strawberry jam to her favorite finger sandwiches, including cucumber with herb butter and smoked salmon with crème fraiche. But with Rev’s buddy Perry coming over for dinner, he is worried that this British tradition may not be Perry’s cup of tea. To make sure Perry is satisfied, the guys chip in and make their own finger sandwiches – Parmesan meatball sliders. Don’t miss all the fun, family and decadent dishes through the season, including episodes in which Rev and Justine create restaurant-worthy maki sushi rolls for the family, and Justine and Rev preparing succulent cracked crab in a buttery garlic sauce, served with rich garlic noodles and finished with a gourmet banana ice cream and fudge sauce for date night while the kids are out of the house. Plus this season, Rev realizes his dream of creating a Sunday Supper stay-cation with an at-home Hawaiian luau, featuring Justine’s Green Papaya Salad and Rev’s favorite banana leaf steamed pork. Rev and Justine show viewers that for the Simmons family a good time always starts with amazing food.

Rev Run is one of the most iconic figures in music, having sold tens of millions of records worldwide and is widely credited for ushering rap music into mainstream culture. An inductee of the Rock & Roll Hall of Fame, Run-D.M.C. was named the greatest hip-hop artist of all-time by both MTV and VH1. With his trademark Adidas sneakers, black track suits, and gold chains, Run has long been a global fashion influencer. His hit MTV show, “Run’s House,” aired for six seasons and became one of the most widely viewed shows on cable television. Rev most recently starred in “Rev Run’s Renovation” on DIY and HGTV Networks, and can currently be seen on “Rev Runs Around the World on Travel Channel.”

Add a touch of Tuscany to your dinner table