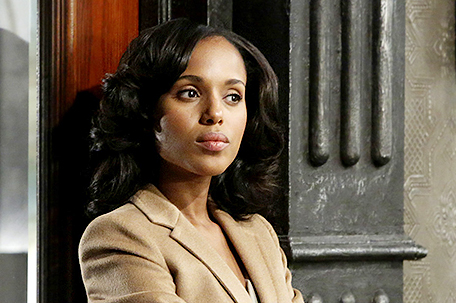 ABC announced earlier this year that the network had cut the number of episodes it ordered for the upcoming 6th season of “Scandal” from 22 down to 16, and that the show will not return in the fall as usual Instead, it will be back as a mid-season replacement in early 2017 for an uninterrupted 16-episode run.

Speculation was that the episode cut and the series’ move were due to star Kerry Washington’s pregnancy (she was expecting her second child at the time of the announcement; she’s since given birth).

Others assumed that the show’s decline in ratings last season were to blame. Season fivewas “Scandal’s” weakest of the last three seasons in terms of ratings, with live viewership sinking from over 10 million for the first episode last September, to just over 6 million for the season finale, Episode eight months later – marking one of its lowest viewership draws in the history of the show. Season premieres and season finale’s – especially those of *hot* series – tend to draw the highest viewership of any season. A strong start with a weak ending suggests a loss in interest among viewers over the course of the season.

But speaking with the AP over the summer, Washington shared that the reason for the shortened season, and the move to a 2017 run, had nothing to do with her pregnancy. As she said, the decision to cut the number of episodes for the next season by about 27 percent was made before she told showrunner Shonda Rhimes that she was pregnant. The reason for the “downsizing,” per Washington, was that Rhimes knows what the story is that she wants to tell for the season, and how many episodes she needs to get it wherever she wants it to go. In effect, it’s a shortened season because the planned story dictates that it needs to be a shortened season. She doesn’t need 22 episodes; only 16. She’s being efficient.

I should also note that Rhimes has said repeatedly that she knows exactly how and when “Scandal” will end, adding that it would be a 6 or 7-season series, at most. So of course, with the number of episodes for the upcoming season being cut by six, and it also happens to be the 6th season of the series, we can assume that “Scandal” is indeed near its end. If what Rhimes said previously about the show not being more than a six or seven-season series holds, fans should be prepared for Season Six potentially being its last; if not, then Season Seven would most likely end it.

This might actually be a good time to put it to bed (slipping ratings to start), while Washington explores other projects under her new production deal with ABC (recall that she inked an overall deal with ABC Studios that will see her develop new projects for the network) which is now being led by a new president in Channing Dungey, who, earlier this year, replaced exiting Paul Lee, making her the first African American – woman or man – to not only head ABC, but a major TV network.

Also Rhimes has other series to shepherd; joining veterans “Grey’s Anatomy” and “How to Get Away With Murder” this season, will be the new post-“Romeo & Juliet” project from Shondaland, “Still Star-Crossed,” which stars British actress Lashana Lynch.

There’s also “The Catch” (another recent Shondaland series) which was renewed for a second season.

In addition, Rhimes is returning to her feature film *roots* (her breakthrough gig, we could say, was co-penning the script for the 1999 telepic “Introducing Dorothy Dandridge;” other early scripting credits include Crossroads and The Princess Diaries 2: The Royal Engagement). Earlier this year, she was reportedly eyeing what will be a feature-length film, set up at Fox, about the so-called Dare Divas – a group of Detroit women, led by Sheri Hunter (who lost her husband), who have dedicated their lives to pursuing adventure and encouraging other women to also take risks.

Previously, she was attached to write the screenplay for a feature film titled War Correspondents, which was to center on women war correspondents, for Sony Pictures.

So she’s busy, in case it wasn’t already obvious. And dropping one series in “Scandal” (which seems to be losing its luster for some of its fans anyway), may actually be a good thing, as she shifts focus to other projects.

Taking “Scandal’s” place this fall at 9pm (between “Grey’s” and “Murder”) has been a new series titled “Notorious” (not a Shondaland project) which centers on the relationship between a charismatic defense attorney, played by Daniel Sunjata, and a powerhouse TV producer, played by Piper Perabo, as they attempt to control the media, the justice system and ultimately each other.

“Notorious” hasn’t been much of a ratings hit for ABC unfortunately, and may not return for a second season.

As for “Scandal,” ABC announced this morning that it will officially return on January 19, 2017 for season 6, back to its 9pm time-slot, between “Grey’s Anatomy” and “How to Get Away with Murder,” which means Shondaland’s TGIT 3-hour block returns in full.