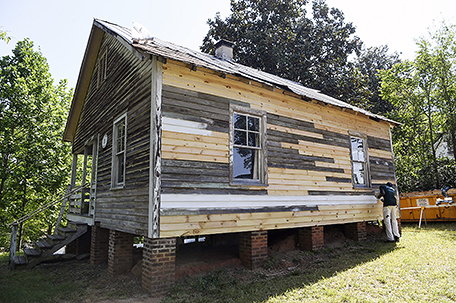 ABOVE PHOTO: Tyle Woodard, 17, paints the birthplace of Nina Simone in Tryon, N.C. The nearly 90-year-old home where Simone grew up in Tryon, north of the city’s downtown, is being stabilized after years of neglect that nearly saw the structure be demolished. Workers from the National Trust for Historic Preservation’s HOPE Crew plan to spend much of May replacing and painting exterior siding on the 660-square-foot structure ahead of additional work on windows, interior and the roof.  (Angela Wihelm/The Asheville Citizen-Times via AP)

ASHEVILLE, N.C.–On a day far in the past now, you might have heard the mellow tone of a piano emanating from between these walls on East Livingston Street. But that was a different day with a preacher’s family who have long since left this place.

What you might hear today is hammering or the scraping of paint, all in service of a restoration project to preserve the home and honor its most famous ex-tenant: the late music and civil rights icon Nina Simone.

The nearly 90-year-old home where Simone grew up in Tryon, north of the city’s downtown, is being stabilized after years of neglect that nearly saw the structure be demolished. Workers from the National Trust for Historic Preservation’s HOPE Crew plan to spend much of May replacing and painting exterior siding on the 660-square-foot structure ahead of additional work on windows, interior and the roof.

Tiffany Tolbert, a senior field officer for the National Trust, said it’s the start of a significant rehabilitation effort that ends with a strategy for implementing arts and culture programming into the home’s future.

In that way, there’s still quite a bit of work to be done, Tolbert said.

“They do want whatever the use will be to honor the legacy of Nina Simone,’’ she said. “But that can happen many different ways. With the Trust, we want to make sure the property is sustainable, that the use is sustainable. There’s a business part to look at as well.

Simone, born as Eunice Waymon, lived in the home as a child, the sixth of eight children to parents Mary Kate Waymon and the Rev. John Devan Waymon. Her biography from the National Trust notes it is the home in which Simone took piano lessons for many years in addition to “experiencing racial discrimination that would shape her world view and social activism later in life.’’

Simone left Western North Carolina in the early 1950s to pursue music, what would be the start of a long and illustrious career that left her regarded as one of the most influential artists of the 20th century. She died in 2003 at age 70.

But her childhood home fell on hard times. It went years without an active tenant and was the subject of several failed redevelopment efforts, the latest of which was launched by former Polk County economic development leader Kevin McIntyre in 2005. He put the property up for sale in 2016 after running out of funding for the project.

It was purchased for $95,000 in 2017 by four prominent Black artists: Adam Pendleton, Rashid Johnson, Ellen Gallagher and Julie Mehretu. They, in conjunction with the Nina Simone Project, the World Monuments Fund and the North Carolina African American Heritage Commission, have partnered with the National Trust to chart a path forward for Simone’s longtime residence.

In the next month, Tolbert said plans for the home will begin to take shape. The National Trust is organizing a mid-May visioning workshop in Tryon with invited local artists, project partners and preservation experts to discuss strategy. The session is not open to the general public.

Public input is being encouraged through a five-question survey offering such options as a museum, an artist retreat, event space or residential use.

“The reason we’re holding off on the interior is we want to know what the use will be,’’ Tolbert said. “How it is rehabbed internally will need to function for the use. Right now, we don’t know.’’

On a shaded portion of the porch during the morning of May 2, 20-year-old HOPE Crew members Javone McDonald and Jacenia Hawkins were scraping paint and reflecting on the experience. They are part of a pre-apprenticeship program with the Schenck Job Corps Civilian Conservation Center of North Carolina, aimed at preserving Black cultural heritage and learning skills in STEM related fields.

Neither could name a Simone song having become recently oriented to her work, but both said they hold her music in high regard, particularity with the influence of others in their families.

“I feel like this place, it’s kind of like, inspiration,’’ Hawkins added. “Like you don’t have to be from something big in order to become what you are or what you want to be. It’s very nice.’’