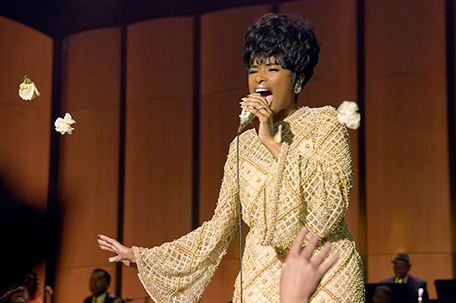 Very few singers have helped blend genres and create a signature sound in the way that Aretha Franklin has. Her vocal agility, musicality, tone, piano playing, and the feelings emoted through her music remain unmatched.

Fans of Aretha can rejoice in the fact that Ms. Franklin is finally being represented on the big screen in the biopic “Respect.” The “Queen of Soul” herself hand selected Jennifer Hudson to play the title role.

The cast of “Respect” gathered during a virtual press conference to share their experience working on the film and the impact that both Aretha Franklin and their perspective roles had on them.

Leading lady Jennifer Hudson had many opportunities to spend time with the Queen of Soul prior to her taking on the role. She credits those one-on-one interactions, as well as her love for the Queen, as the foundation for her work in the film.

“I think a lot of my influence obviously came from being a fan first of all, looking at her from that angle and being able to get a sense of who she was as a person. Being around her through conversations, just watching how she existed in life and even her influence in mine as well”, Hudson explained. “The perspective changed when all of sudden now I have to portray her, because it’s one thing to look at her as a fan, but when you have to portray the singer, it’s a completely different perspective. Being able to know her and then look at her as a figure… putting it all together helped me to be able to channel her or at least try.”

Marlon Wayans, who plays Franklin’s first husband Ted White, took an interesting approach to his take on playing White, who was known for having a tumultuous and abusive relationship with Aretha.

“I just started with the relationship between him and Aretha,” Wayans said. “I think for me, I just didn’t want to play anger and abuse. I wanted to play insecure, I wanted to feel insecurity, lose control. I think a lot of times in relationships, [when we see] women that are with abusive men, oftentimes we go, “Why don’t you just leave him?” and that seems like something easy to do. But we forget there was something there that made them fall in love. Even though on paper he can be a bad guy, [it] was allowing myself to embrace the vulnerability, dare I say of someone that is so damaged that they damage others.”

One of the most impressive aspects of “Respect” —  Hudson’s singing aside — was the performance of young Aretha by Skye Dakota Turner.

“Before I even got the audition for the role of young Aretha Franklin, I sang her songs — specifically one song, “Precious Lord,” which is the song I auditioned with,” Turner said. “My parents introduced me to a lot of Ms. Aretha Franklin’s music. To hear that I got the part and to actually step into the role was a challenge. I had to remind myself that I was not young Aretha Franklin, but also became Aretha Franklin. So, I had to basically immerse myself in the role, and I hope that I did it in the best way possible.”

“Respect” highlights the first three decades of Aretha Franklin’s life. It shines light on the fact that she became a mother at a very young age as a result of rape, the tragic loss of her own mother at age 6 and it highlights the rocky relationship between Aretha and her family — specifically her father.

Franklin’s relationship with her father (who was both controlling and a womanizer), eventually spilled over into all other areas of her life, including her relationships with those closest to her and later into the integrity of her performances.

Franklin was intentionally made to feel like she was voiceless for most of her life — by her father — by her record label and by the men in her life. She was silenced, except for when she was expected to perform. Franklin’s inability to address the demons that followed her from childhood trauma, paired with constantly being silenced, and the realities of being a Black female singer/songwriter during the height of the Civil Rights Movement eventually resulted in an ongoing battle with drinking that she almost didn’t win.

Franklin fought against racial barriers, misogyny and the pressures that superstardom brings — and she overcame tremendous hardships in the process. “Respect” gives the audience a glimpse of all of that.

Franklin was also known for being extremely private, and perhaps that’s why the film shied away from digging deeper into some of the pain of her past. However, Hudson’s performance was strong, and the life and legacy of Franklin is honored in “Respect.” In the moments where Hudson embraces the pain that a life of forced endurance made Aretha overcome, there is beauty in the breakdown and in that vulnerability.

Additionally, the chemistry and talent of the cast is undeniable and truly is an enjoyable experience. Last but certainly not least, the music in “Respect” honors The Queen of Soul’s ability to transform a song into something unique, incredible and absolutely Aretha!

“Respect” opens in theaters nationwide on August 13. Check your local listings for showtimes — it’s a must-see!