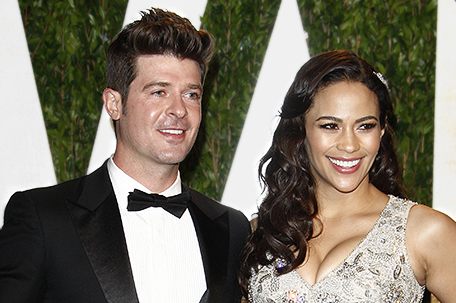 ABOVE PHOTO: Robin Thicke and Paula Patton arrive at the 2012 Vanity Fair Oscar Party at the Sunset Tower in 2012 in West Hollywood, CA. (Helga Esteb / Shutterstock.com)

Paula Patton reportedly told Robin Thicke on Friday the marriage was over, causing the singer to cancel his concert in Atlanta that night and fly to Canada to beg the actress to stay – this according to TMZ.

Sources connected with the couple tell the website that Patton, who is in Vancouver shooting a film, had a long face-to-face talk with the crooner, both acknowledging they had not been getting along and frequently arguing.

TMZ cites sources who say in the end Robin realized Paula was determined to end the marriage and reluctantly agreed, but was very upset. The actress was also said to be upset, according to the website.

The next day Robin cancelled his Orlando concert so he could be with their son Julian Fuego, who turns 4 in April.

“We will always love each other and be best friends, however, we have mutually decided to separate at this time,” the couple said in a joint statement released to the media.

Paula Patton told Robin she wants to end the marriage

Paula Patton has filed for divorce from Robin Thicke