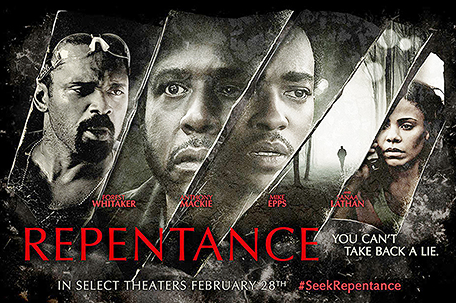 Therapist Thomas Carter (Anthony Mackie) has just published a popular self-help book about the near death experience, which helped him turn his life around. He is proud of the fact that after almost perishing in a horrific, alcohol-related car crash in his teens, he eventually not only earned graduate degrees in World Religion and Clinical Psychology, but went on to wed his soul mate, Maggie (Sanaa Lathan).

Today, Tommy has a happy marriage and a flourishing practice founded on a spiritual philosophy combining faith and positive thinking. But sadly, his enviable fortunes have proven to be the polar opposite of his wayward brother Ben’s (Mike Epps) lot.

The recently-paroled ex-con was barely back on the streets before word of a $12,000 bounty being placed on his head spread around their native New Orleans. So, when Ben approaches his successful sibling for enough cash to keep his bloodthirsty adversaries at bay, empathetic Thomas opts to raise the ransom by extending the best-selling tome’s publicity tour.

At a local book signing, he is approached for an autograph by a fan also urgently in need of one-on-one counseling. Against his better judgment, the literary rock star agrees to see Angel Sanchez (Forest Whitaker) as a patient, since the $300/session fee definitely will put a dent in brother Ben’s debt.

Even worse is Dr. Carter’s fateful decision to make house calls to the home of this loner left devastated by the death of his mother (Adella Gautier). For, although it might be easy to diagnose the source of the deeply-disturbed man’s anguish, the only hint that he’s at the end of his emotional rope is his estrangement from his wife (Nicole Ari Parker) and young daughter (Ariana Neal).

The plot thickens when Angel takes his new shrink hostage, tying him up in his basement-turned-makeshift torture chamber. The psycho proceeds to behave sadistically while conveniently managing to keep up appearances for the sake of any visitors and passersby.

Directed by Philippe Caland (Ripple Effect), Repentance is a momentarily-intriguing psychological thriller that establishes a compelling premise only to morph into an otherworldly horror flick. Over the course of this rudderless adventure, Forest Whitaker ultimately finds himself abandoned by an implausible script.

The Silence of the Butler!