Renowned pianist Fats Domino has street renamed in his honor 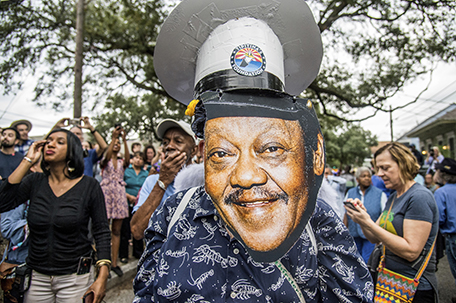 ABOVE PHOTO: Fans parade down Poland Avenue toward the former home of music legend Antoine ‘Fats’ Domino during a second line parade honoring him on Nov. 1, 2017, in New Orleans. The New Orleans street where Domino, one of the founders of rock ‘n’ roll spent most of his life, is being renamed in his honor. (Photo by Amy Harris/Invision/AP, File)

NEW ORLEANSLPL PPM — The New Orleans street where one of the founders of rock ‘n’ roll spent most of his life is being renamed in his honor.

A community wide Second line and Musical Celebration began last Saturday at the longtime home of Antoine “Fats” Domino on Caffin Avenue, which will now be known as Antoine “Fats” Domino Avenue. Led by the Stooges Brass Band, the second line proceeded down the renamed street to Oliver Bush Park, where musical tributes to Domino occured.

Rev. Willie Calhoun, who has lived in the Lower 9 his whole life and is one of the celebration’s organizers, said the recognition for Domino was a long-time coming.

“Fats never left the city and he’s never really been celebrated, even though he chose to stay in New Orleans and to raise his family in the Lower 9,” Calhoun said. “He had a choice to live anywhere he wanted and he made the choice to live right here.

“I think this event will help bring some life and recognition to the neighborhood,” he said. “The Lower 9 has gotten so much negative press, we wanted to bring people back to the area and show them the reason why Fats stayed. He stayed because this is a valuable and viable community.”

Domino died Oct. 24, 2017, of natural causes at the age of 89. He survived the massive flooding that followed Hurricane Katrina’s landfall on Aug. 29, 2005, but had to be rescued by boat from his home, where he tried to ride out the storm. Storm surge flood waters poured into the Lower 9th Ward, knocking many homes off their foundations.

A large barge was swept by flood waters into the neighborhood, leveling homes beneath it. The area was flooded again by Hurricane Rita a month later.

Sharpton calls for NY street named after Robert E. Lee to be renamed in honor of Colin Powell