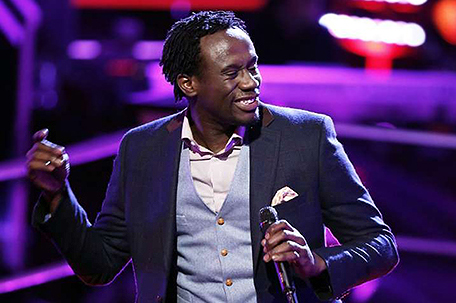 Singer Anthony Riley passed away over a year ago.  The street performer’s smooth vocals on Philadelphia sidewalks and parks, and later on NBC’s The Voice, captured both the city’s and America’s hearts.  His older sister, Halima Miley, reflects on her younger brother and plans to keep his legacy alive.

“We’re all dealing with his loss as individuals,” she says of herself and Anthony’s eight siblings.

“Me personally, with my children, it’s hard. It’s still fresh.  Me and Anthony were really close.  I was nine when Anthony was born. I was a surrogate mother to him,” says Halima.

She notes that Anthony was always special.  At the age of three, he would wake up at 5 a.m. with his grandmother and mimicked how she read the paper and drank her coffee.

“Our grandmother would give him a newspaper and an empty juice cup so he could imitate her sipping coffee and reading the paper.”

As a child, singing was his preferred method of communication.

“As a baby he sang everything, he would not talk. When he cried, it sounded like he was singing.  When we would say ‘Good Morning,’ he would sing back good morning” says Halima.

Although Anthony was tremendously talented, he was battling many personal issues that led him to unhealthy ways of coping—specifically in the form of drugs.

Looking back, Halima says there were problems, including mental illness that eventually led to his drug use and addiction.  His problems started when he was young.

“He was bullied everyday because he was a different kind of person.  People took advantage of that–him fighting with his sexuality and family issues.”

“His problems were more mental than the drugs,” referencing that his mental illness was the result of a disorder and also because of the challenges he faced in his life.

“Yes, there were things that could have been done to prevent this. None of us were educated enough to handle mental illness. We thought it was the drugs.”

Anthony was trying to cope with his pain and addiction.  Last year at the age of 28, he committed suicide.  He died at a pivotal time in his career, after wowing the judges on NBC’s The Voice.  Anthony selected one of the judges, producer and singer Pharrell Williams (who was taken aback by Anthony’s soulful vocals), to be his coach for the remainder of competition.

But, that was not enough to help the singer fight his demons. The singer withdrew from the show for personal reasons. He later revealed that he left to enter a treatment facility for substance abuse. It’s been reported that NBC paid for his rehab stay.

Although Anthony lost his battle to addiction and mental illness, Halima is ensuring that her brother’s legacy lives on.

She is in the process of starting a non-profit in Anthony’s honor that will help Philadelphia street performers get the tools they need such as permits and equipment to perform.

In 2007, Anthony was arrested for performing in Rittenhouse Square and was charged with disorderly conduct.  Residents of the upscale Rittenhouse Square community were complaining about performers in the park.  He wasn’t aware that he needed a permit to sing.  A public outcry followed.

“I would stay behind missing several regional rail trains just to watch them [he and guitarist Robby Parsons] play. Anthony sang several songs that I liked such as ‘Hotel California’ by the Eagles, ‘Hello’ by Lionel Richie and a song called ‘Can’t You See’ by the Marshall Tucker Band,” says Nichol Wesley from Philadelphia, a faithful fan of Anthony Riley.

“Anthony inspired others with his positive energy and charm. He was very approachable and friendly, always smiling and giving kind words. I last saw Anthony perform at Rittenhouse Square.  He would often draw huge crowds. It’s really hard to go down into the city and not see him performing, especially on beautiful warm days where he would be out there giving his all. He will be missed and in my opinion always remembered as the Voice of Philly,” continued Nichol reflecting on Anthony’s legacy.

As for Halima, she is setting a date, planning an upcoming memorial event in honor of her brother.

The memorial will have live musical performances including praise dancing and a singing tribute from Anthony’s best friend and guitarist Robbie Parsons.  In addition to performances, behavior health and substance abuse prevention advocates will speak during the program.  There will also be a candlelight vigil.

“I think my brother lived by that saying.  He didn’t street perform to make money. He did it because it made him happy.  He really liked to give his joy to the world.”

Halima reflects on the life lessons that Anthony’s taught.

“Those who knew him, knew not to wait until tomorrow to do what you want to do today.”

She says that another lesson from her brother’s life is that it’s never too late. And, that no matter how talented you are, we all need help with our shortcomings. We need to ask for help.

As far as NBC’s The Voice Halima says “they are open to continuing his legacy.”  However, for confidentiality reasons she can’t discuss further.

Halima has her own take on what Anthony’s legacy will be.

“His legacy is to the street performers and people of Philadelphia- that you can be anything you want to be.”

Anthony Mackie– No Pain, No Gain! Anthony philosophizes about ‘making it’