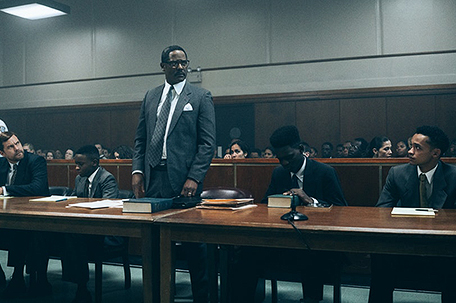 ABOVE PHOTO: A scene from the Netflix miniseries “When They See Us.”

When we first heard the story of the five Black and Brown boys in New York that were accused of raping a jogger in Central Park in 1989, many Black and Brown people blocked it emotionally. Not because they didn’t care — they did — but all they could do was feel the helplessness and anger created from a system of corruption that had some of us sharing the belief of the society-at-large that these boys were guilty.

“When They See Us” was so much to unpack, because Black and Brown families knew how this story would most likely end whether, they were around during that time or not, based on the dire warnings of their parents to always be careful. They knew that the teens would be found guilty due to having the nerve to be in the wrong place at the wrong time, while simultaneously being regular teenagers in a city that barely tolerated them.

So, to the shame of many of us, we just didn’t think about it beyond talking quietly amongst ourselves while thanking God that our children were safe. The families embroiled in that tragedy and the people who supported them didn’t have that choice. It forever changed their lives. It was about to change ours, too.

I was barely 21, still “wet” behind the ears, and a newly minted immigrant to America. I had zero idea what or where Central Park was, and never followed the case beyond remembering that our current President of the United States, Donald Trump, took out a full-page newspaper ad calling for the reinstatement of the death penalty for these boys, something he has yet to take back despite their being exonerated.

So as the buzz emerged a few days ago about Ava DuVernay’s biographical mini-series on the case, it was with a prayer of faith that l decided to watch.

I was 34 minutes into the first episode and had to turn it off to shake the cobwebs of despair from my soul.  I watched in abject horror as adults, who should have known better, mangled and reshaped the images of these minors to create a narrative that would almost destroy them.

They were labeled as animals and thugs in the minds of average citizens in New York and became “super predators” who just had to be guilty of what they were being accused of, because perception quickly becomes reality in the media and justice system.

It was decided by these adults that these boys’ lives weren’t worth the molecules that made them. It was devastating to watch how they screamed at, taunted, and beat those teens into submission to manipulate them into “confessing” to a crime they didn’t commit.

DuVernay cast a startling light on Linda Fairstein, the prosecutor for the District Attorney who allowed her ambitions to overshadow her basic human decency.

Bolstered by the cops, Fairstein created a false scenario and bulldozed those families through the system willfully and wrongfully to win this case even as the evidence consistently said otherwise. She created a scenario to support it and forced those who worked for her to go back to terrorizing those boys to corroborate her theory by any means necessary.

Using fear and false promises that they’d be able to go home if they told the “truth” scripted by the adults who were torturing them, the police took 44 hours to break their spirits. Fairstein got her “win” and the adoration of those who believed her. But the cost those innocent young men paid has been searing to those who are viewing it in “When They See Us” 30 years later. One of those young men, Korey Wise, lost 13 years of his life in Riker’s Island, one of the most violent adult prisons in the state. He was 16 when convicted.

Thanks to the miniseries, Fairstein is now once again in the news. Only this time, a giant shadow is being cast over her as people are seeking to “cancel” her. Once the word got out about her participation in the Central Park Five trial and how that manifested itself, Fairstein was stopped from getting a prestigious lifetime literary award, according to a November 2018 NY Times article. She has also been forced to resign from the board of directors of Safe Horizon, a New York City-based non-profit aiding victims of domestic abuse and from the board of trustees of her alma mater, Vassar College since the miniseries began airing.

But is that enough? Should that type of clear corruption and disregard for the truth go unpunished?

It took my husband and l all day to watch those five hours, and by segment four where then 16-year-old Wise was being abused not only by the system, but by the people within it, I noticed that my husband was getting agitated and it triggered him in a way l had never seen before.

In a quiet voice, he began speaking of the things he has had to endure, and while my mouth dropped in shock at some of what he shared, I remained quiet, so he could get it all out.

How many more families were triggered this way, I wondered. How many stories like this have never been told?

As Black people, it is not lost upon us. These injustices continue to happen in the judicial system, but there are people in the trenches daily making incremental changes in ways large and small.

One of them is Connie Grier, an educator and staunch advocate for returning citizens.

“As I sat down to watch the documentary, my reaction was visceral,” Grier said. “I felt nauseous, angry and was moved to tears. The one emotion I did NOT experience, however, was surprise.”

No shock coursed through my body as I witnessed adults behave in manipulative ways in their pursuit of a confession. I was not stunned as I watched children subjected to hours upon hours of physical, mental and emotional inquisition techniques (yes, I said inquisition as the term; “questioning” is far too mild a description). I was not astonished to see minors turn against one another out of desperation and a desire to go home.

Why not, you may ask?

Because honestly, in my years of justice-related research and time spent working with those impacted by incarceration, this information has become common knowledge.

Disproportionate sentencing guidelines, a well-documented area of injustice, is definitely a factor in regards to innocent individuals confessing to crimes they did not commit so that they can “do less time” or “get home faster,” Grier said.

“According to the US Sentencing Commission, Black prisoners charged with crimes are sentenced to nearly 20% longer prison terms than White prisoners charged with similar crimes,” she said. “So, when Black and Brown boys are told, in so many words, to ‘say this if you want to get out of here sooner’, many will out of fear.”

“The confession-obtaining manipulations viewed in “When They See Us” are NOT isolated,” Grier continued. “We must always, ALWAYS encourage our youth to consistently ask for an attorney or stay silent because, as intelligent as they may be, they are up against a beast of epic proportions for what very often turns out to be a fight for their lives.”

She said a mouthful…and it’s information that families everywhere should heed.

Aside from the obvious bias of the District Attorney’s office and the police department, the other thing that stood out as hubby and I continued to watch the miniseries, was the public defender for one of the boys.

He took the case, and it was clear by his callous attitude that he did not believe his client was innocent, until another defense lawyer began piecing the faulty evidence together. He then had a change of heart, and  jumped in to participate. Again, how often did this happen, l wondered.

I asked Defender Association Chief Keir Bradford-Grey about this.

“When They See Us’ is more than a story from the past,” she said. “For our clients and people of color in Philadelphia, it is past, present, and future. The hateful words used to describe Yusef, Antron, Kevin, Korey, and Raymond before they were convicted of a crime they did not commit, echo through our society today. This implicit bias drives mass incarceration and the racial disparities that plague our system.”

“[When They See Us] is a powerful reminder that every criminal justice system partner must improve its own practices and work together to combat the racial disparities that fills our jails with primarily people of color. We cannot turn back time and protect five innocent boys from unspeakable trauma and false convictions, we can prevent people of color from the same fate today.”

In conclusion — to the people who are in positions of power — know that we are now watching! You should always strive to do the right thing.

The suffering you allow to be meted out on people who are undeserving, will come back to haunt you in ways you may not imagine. Even if it is decades later, as it was in this case, karma will not be denied. To our allies who remain in the trenches to fight against what you see and experience, you will reap richly, the love and tenacity you have consistently shown — thank you.

To our Black and Brown families: Research and find services that may be able to help you should you or a family member find themselves caught up in the system. Do NOT take plea deals when you are innocent. Challenge the system and seek those who are capable to give you solid advice. What sounds good is not always so.

The redemption song for these five must go beyond our triggering traumas, to bucking a system that often seems hell bent on destroying us.

SUN Editor Note: Where Are the Central Park 5 Now?

After ‘When They See Us,’ social media comes for Central Park 5 prosecutor Linda Fairstein’s pocketbook

Philadelphia Parks and Recreation and Fairmount Park Conservancy unveil ‘The Present’ at Christmas Village in LOVE Park, presented by Bank of America