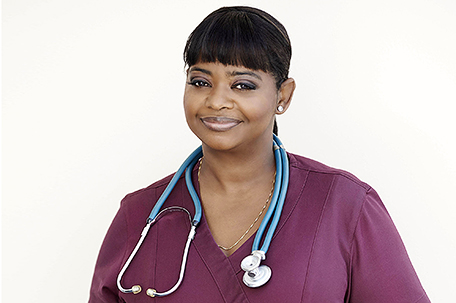 Produced by Steven Spielberg’s Amblin TV, the premise of Red Band Society involves a group of teenagers each struggling with their own set of health issues trying to lead a semi-normal life while living in the confines of a hospital.  They experience inevitable teenage angst, love, mischief, heartbreak, and laughter while attempting to remain a close knit group.  Each of them wears a red hospital band, thus birthing the name of the series.

Charlie (Griffin Gluck), a young boy stuck in a coma,  is the floating voice of reason in what seems to be a chaotic situation.

The cast is mostly fresh actors with a couple familiar faces peppered throughout including Spencer.  Playing the stern yet big-hearted Nurse Jackson, she is in charge of the Pediatric Ward at Los Angeles’ Ocean Park Hospital, watching their every move like a hawk.  Dr. Jack McAndrew (Dave Annable; “Brothers and Sisters”) is the attractive, brainy top pediatric surgeon that offers the kids tender words and top care.  And Nurse Brittany Dobler (newcomer Rebecca Rittenhouse) is too naïve for her own good, letting the teens get away with any and everything.

This wouldn’t be a coming-of-age story if there weren’t characters reminiscent of The Breakfast Club for good measure.  There’s mean cheerleader Kara (Zoe Levin) suffering with a failing heart who eventually learns to make a few friends, mischievous and highly comical Dash (Astro; X-Factor) who cons his way to victory and attempts to forget his cystic fibrosis, brainiac Emma who battles an eating disorder, and the ridiculously hot Leo (Charlie Roth).  Oh and, like high school, there’s the new kid Jordi (Nolan Sotillo).

Writers on this series push the envelope in the script.  It’s raunchy, fresh, and funny, making it believable that teenagers would say and do what is on screen.  We get a glimpse inside each of their lives and learn how they came to be at Ocean Park.  From beginning to end the pilot episode was entertaining, and it would be great to see how this series competes in the Wednesday night lineup.  Make sure to tune in on Fox 29 at 9pm.