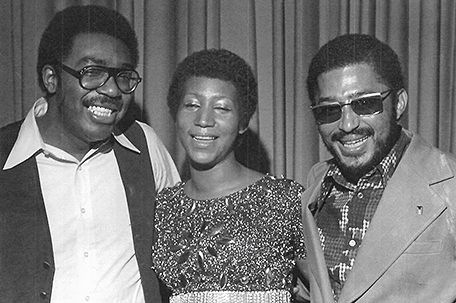 My most precious memory of the great Aretha Franklin occurred in the early 1970s when I was an associate editor of Ebony Magazine, working in Johnson Publishing Company’s New York City office.

The Rockefeller Center office was headquarters for Ebony’s advertising department. It only had five editorial staffers, myself, Jet editor Cordell Thompson administrative assistant, Bernice Bryant and photographers Marshall Wilson and Pulitzer Prize winner, Moneta Sleet. Cordell wrote Jet’s hugely popular New York Beat column. If he was away on assignment or vacation, I had the opportunity to write that column. It so happened that Cordell was away when Aretha was scheduled to do a concert in New York City’s Radio City Music Hall.

During the concert, between songs, Aretha posed, profiled, and strutted around the stage, very proud of her new slimness. It was a Diana Ross kind of performance as far as I was concerned and some what distracting since it was not the Aretha we were familiar with. That Aretha would sit at the piano or stand at the mic and carry us on a soulful journey with her powerful, compelling, incredible singing.

When writing New York Beat, I wrote that I wished Aretha would understand that  she didn’t have to do all that posing and strutting. All we needed from her was her glorious voice.

Several months later she was scheduled for a concert in Westchester County which is in New York City’s regional area. The day before her appearance I received a phone call from Barbara Harris, a public relations expert for Atlantic Records, Aretha’s recording company. Barbara told me that she had just gotten off the phone with Aretha who told her to make sure I attended her concert and to bring me backstage when it was over. “Uh-oh!” I thought, “She’s going to blast me for my comment in Jet.”

The concert was right on time. Aretha didn’t pose or strut around the stage; she sat at the piano and stood at the mic and mesmerized the packed audience with her incomparable, soul-stirring singing. Immediately after her last song, Barbara took me backstage. When we walked into Aretha’s dressing room, she was sitting in a chair looking as though she was waiting for us. “Good evening, Miss Franklin,” I said nervously.

After greeting me, Aretha said in a calm voice, “I read what you wrote in Jet. What do you think about this concert?” Relieved by the non-hostile tone in her voice, I said, “That’s exactly what I wrote about. You were absolutely incredible.”

She smiled and we had a brief five minutes long conversation, mostly about my love of her singing and her whole style. Barbara then led me out of the dressing room. That is my most precious memory of Aretha Franklin.

There is a quote listing three kinds of people in the world – those who make things happen, those who watch things happen and those who wonder what’s happening. Aretha Franklin was most definitely one of those folks who made things happen in the Black, national, and international cultural arenas.