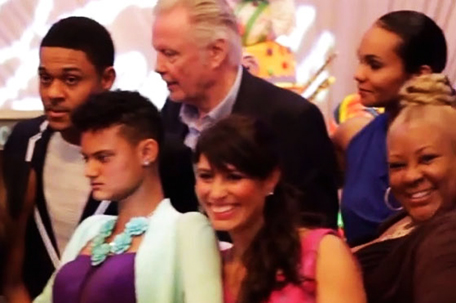 He may play the long lost, illegitimate black son in Showtime’s “Ray Donovan,” returning July 13, but in real life, Pooch Hall was shown nothing but love from his TV fam as they came out to support a charity close to his heart.

In March, the actor and his wife Linda hosted a first-of-its-kind Special Needs Family Prom in North Hollywood, Calif. that doubled as a “Sweet 16” party for their own special needs daughter, Djanai.

The couple’s charity organization, Djanai’s Angels, threw the event as part of its goal to raise awareness and enrich the lives of families of children with special needs. Participants enjoyed red carpet arrivals, a candy cocktail hour, prom photos, a “Sweet 16” birthday cake for Djanai, an inclusive fashion show and the crowning of Prom King and Queen. Music was provided by their very own special needs DJ… DJ Kripple King.

The day was designed as an opportunity for supporters and families to mingle with celebs, learn about Djanai’s Angels and raise funds for the inClusion Clubhouse, a planned facility that would cater to the needs of families with special needs kids.

Djanai is “developmentally delayed with cerebral palsy,” according to her mom, Linda.  Pooch told essence.com of their eldest daughter, “She is handicapped, in a wheelchair and can’t walk or talk, but she’s still the happiest girl in the world. She doesn’t know hate, she doesn’t know race, she doesn’t know judgment. She just knows love and fun.”

Research: Prom Hairstyle– Now is the time to begin searching for that prom night hairstyle