‘Race’ star Stephan James— A Fight to the Finish Line 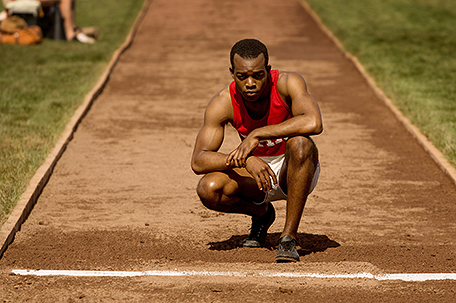 ABOVE PHOTO:  Stephan James as Jesse Owens in “Race.”

If I had to describe actor Stephan James in three words from an interview comparable to “The Buckeye Bullet’s” fastest race, I would have to say he is gracious, to the point, and focused.  The Canadian actor is sitting pretty in the ‘Golden State’ on the press junket for his upcoming biopic Race, a film chronicling the life of Jesse Owens primarily before and during the 1936 Olympic games in Berlin, Germany.  At 22, the same age Owens was when he won his medals, James finds himself his star steadily rising in the City of Angels. 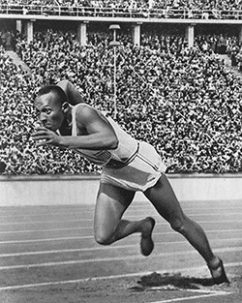 James found out he would be the lead in Focus Features’ production while in Atlanta, on the set of Selma (where he portrayed John Lewis,) so his experiences there would benefit him greatly.  “I was elated, to not only be telling such a huge story, but to step into the shoes of such an iconic man.  To be around some of the performers [of Selma] I was working closely with Oprah and David Oyelowo, for me that was invaluable going right into Race, to work with people who took their craft so seriously, a lot of things I took from that and made it a seamless transition.”  And seamless it was.  Without giving anything away, Selma’s John Lewis was in-your-face fierce demanding justice for blacks while Jesse Owens decided to go for the demonstrative approach, obliterating records and breaking barriers one pace at a time.

As a child, James was a lover of all sports, counting Lakers star Kobe Bryant as a favorite.  To get the chance to play such a profound athlete like Jesse Owens and learn his mannerisms and life story was something important to James, as he needed to become the character, training for two months to get that svelte runner’s physique. “There’s only so many clips on YouTube from the 1930s so I had to take what I could in terms of his [Owens] interviews and get a handle on his mannerisms and the way he spoke.  I knew that if I was going to play someone who was the fastest man in the world, that I had to run like how he ran, so it was very important to me to get the little details right and make sure I was perfecting that.”  Although the actor is a bit taller than Owens was, James still became a character that not only broke records, but saw past race and focused his energies on the love of sport and sportsmanship.  “Jesse made his impact by his love for running.  That changed not only sport but it transcended the world.”

A standout scene for James was where he entered the Berlin stadium for the first time.  Using a green screen to create the atmosphere was something that was a challenge for James, but he used his imagination to transfort him into a German Olympic stadium.  Watching the scene in the final edition of the film “It stood out to me because I know what I had to do but it was important that this scene was believable.  There were so many elements that I hadn’t seen before but I think it turned out beautifully.”

Navigating his career won’t be difficult, since James is up to tackle any role that may be of interest.  “Honestly I’d like to do all sorts of different characters, it doesn’t have to be me playing a real person, it doesn’t have to be a color specific role, it could be anybody.  I just wanna focus on telling incredible stories.”

When asked about his opinion concerning the shut-out of blacks in the Oscars for a second year in a row, he navigated the question with ease adding his two cents and bringing it full circle to his role in Race. “I think it’s important that people are raising the issues, they are talking about it, it’s healthy.  But I think for us [Race crew], what we really tried to do with this film is show people that it really doesn’t matter what you look like or where you come from, anyone’s capable of accomplishing great things.  Jesse was pretty much colorblind and became best friends with a German long jumper, it transcended what they looked like so that’s a testament to how we should live our lives and I hope that’s what people take from this film.”