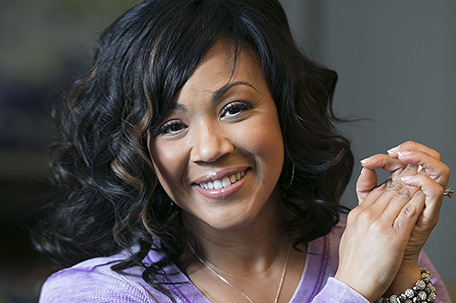 ABOVE PHOTO:  Singer Erica Campbell, one half of the duo Mary Mary, poses for a photo in Atlanta. Campbell is promoting her first gospel solo album, “Help,” releasing March 25, 2014. It will get some good attention thanks to Mary Mary’s hit WEtv reality series, airing Thursdays, which season three debut pulled in nearly one million viewers in February.  (AP Photo/Jason Getz)

ATLANTA — When Mary Mary singer Erica Campbell decided to tell her sister Tina she wanted to pursue a solo career outside the Grammy-winning duo, she was nervous about having the talk.

But Erica felt compelled to be honest with Tina at a time when she was already performing without her sister, who took a break from music last year after she learned her husband had been unfaithful.

“I didn’t know how she was going to respond, but I knew she was not in work mode in 2013. She shut everything down,” said 41-year-old Erica, who is two years older than Tina. “I did quite a few Mary Mary dates by myself. I did dates where they initially wanted Mary Mary. When you do that for so long, you build up this thing where I’m getting used to this. I was enjoying it.”

So far, Erica’s solo career has promise. Her debut single, “A Little More Jesus,” was nominated for best gospel song at this year’s Grammy Awards (she shared the nomination with Tina because they co-wrote the song). Erica’s debut album, “Help,” will be released March 25, and it will get some extra attention thanks to Mary Mary’s hit WEtv reality series (the season three debut pulled in nearly 1 million viewers last month). It airs on Thursdays.

In a recent interview, Erica talked about new music, her sister, airing their drama on TV – and her skintight dress that drew criticism from folks in the gospel world.

AP: How worried were you before telling Tina about your solo ambitions?

Campbell: I had a little anxiety. … I had to kind of explain to her that you can’t have both. You can’t tell me I’m not working or doing anything and expect me to just sit and wait until you’re ready. I’m a creative person. I’m a grown woman with a family. I love what I do. So I’m just going to keep it moving.

AP: What was Tina’s reaction?

Campbell: It wasn’t good, initially. And it got worse before it got better, because I think in addition to what she was going through at home, it just felt like everything is departing from her. But that’s not what it was. … She’s so supportive now. We are real sisters that are committed to being honest with each other. And no, Mary Mary is not broken up.

AP: What was it like to get a Grammy nod as a solo artist and have Tina as part of it because she co-wrote the track?

Campbell: It was amazing. It felt like I could work with her, but then on my own terms. It’s great to work with people, but you need time to just be an individual. I’ve had that opportunity. I’m totally enjoying it.

AP: Was it tough for you to fill in the gaps without your sis?

Campbell: I’m trying to find a way to not sound arrogant. I’m a full and complete singer all by myself. God didn’t give us a twin gift. … We are both complete singers. We just so happened to be paired together.

AP: Would you perform secular music as a solo artist?

Campbell: I don’t break out of gospel. I take gospel into unorthodox arenas, which Mary Mary is about. We’ve worked with Beyonce and Destiny’s Child on the first record and it was a gospel song. At that time, most of our shows were with Lil’ Kim and Snoop Dogg. We would be in places where Sisqo went on singing `Thong Song,’ and then I came onstage singing `Shackles’ after that, and the audience stood on their feet with their hands in the air. … I’m not an R&B artist. I’m not an R&B singer.

AP: You received some backlash from a promotional photo of you wearing a skintight white dress. How did you feel about the criticism?

Campbell: Anytime someone asks me about the dress, I’m always wondering, `What is the problem?’ It was the curves that I didn’t give myself or buy them. God gave them to me. I’m OK with my curves and my sexuality for that matter. Everybody is raised differently. Everybody has different feelings about sexuality and being OK with their body. I was comfortable. When I grew up in church, there were tight dresses in church. But it wasn’t lusty. It wasn’t filthy. It wasn’t dirty. It was beautiful women. I grew up being comfortable with that. It was never my intention to offend anyone.

AP: Because the reality show is popular, do you feel like it could overshadow the music?

Campbell: No. I’m very confident in the message in our music. It’s not one episode where you don’t hear at least three Mary Mary songs.