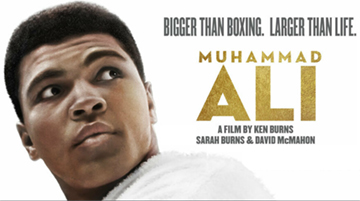 Considering the number of movies, documentaries and other entertainment vehicles made about Muhammad Ali, it would seem that — much like the former heavyweight champion at the end of his 1971 fight against Joe Frazier — there’s not much left to offer that’s fresh.

Will Smith played Ali. Ali even played Ali in “The Greatest.” The 1996 documentary “When We Were Kings” about Ali’s “Rumble in the Jungle” bout with George Foreman won an Oscar.

Documentary filmmaker Ken Burns knew there were more layers to reveal in Ali’s rise from his Louisville, Kentucky, roots into the source of Black pride who captivated America with his boxing braggadocio, his contentious refusal to fight in Vietnam, and all through his final years into his lengthy, heartbreaking battle with Parkinson’s disease.

Burns’ film “Muhammad Ali” explores the life of the boxer who floated and stung his way into greatness.

“He’s just so compelling,” Burns said. “He’s complicated, there’s undertow, there’s flaws and we don’t hesitate to remind people throughout this film that there are. At the end, he is a transcendent American character. He has so much, still today, to offer us. He was, of course, at the intersection of so many themes of race, of politics, of war, of faith, of fidelity.”

Burns began work on Ali, who died at 74 in 2016, nearly seven years ago and said the story on the boxer’s life “lifts up and we see instantly how it resonates in the moment.” Burns (who co-directed the film with his oldest daughter, Sarah, and her husband, Dave McMahon) weaves archival footage and interviews with Ali’s daughters, ex-wives, sports writers, athletes, and activists to stitch together pieces of the charismatic and complicated life of the three-time heavyweight boxing champion.

“There are a lot of really, really great documentary films on Muhammad Ali. I think the opening half-hour, 20 minutes of Michael Mann’s ‘Ali’ is one of the finest openings of any film, ever,” Burns said. “Yet nobody had said, let’s try to do it comprehensively. It’s not definitive. It’s, let’s try and understand him from birth in the early 40s in segregated Louisville, Kentucky, to the death by Parkinson’s.”

Burns talked with The Associated Press by phone from his home in Walpole, New Hampshire, to discuss the four-part, eight-hour series on Ali that airs Sept. 19-22 at 8 p.m. on PBS.

AP: When you peeled back the layers, what was your biggest discovery about Ali?
Burns: I think it’s this sense of purpose. He puts on the gloves, he has a couple of fights and now declares he’s The Greatest. It’s like you’re hitting a double in tee ball and saying, “I am going to be the greatest baseball player ever.” OK, that’s good aspirations. The poise that he has at different points. The Frazier fight, he’d been bagging on Frazier, he’d been predicting, he’d been brash, he’d been bold. But then he talks about setting an example because everybody loses. In fact, everybody does lose. Nobody gets out of this alive. He gets that. He understands something really fundamental. In the midst of this loud, wonderful promoter, learning from Gorgeous George, he has this in him.

AP: What did you learn about how America’s opinion of Ali changed through the decades?
Burns: When he dies, we forget what a divisive figure he was. When he’s out lighting the torch in Atlanta, we forgot what a divisive figure he was. He was considered like a Buddha, like a religious figure. I think it’s the way that in the midst of this loud, cacophonous thing that was his life, how amazingly centered he was, how purposeful it was. (His image) is already improved after the loss to Frazier in the first of the three Frazier fights. He gets hit in the last round and he gets back up. In losing he wins. By that time, we’re beginning to realize he was right about Vietnam. He began to win people back.

AP: Did you feel Ali mirrored the Black experience decade by decade or did he set it by the nature of his celebrity and stances?
Burns: I think it’s a little bit of both. He reflected aspects of it in that he represented a new model of it that was less interested in the old tactics of the Southern, Christian civil rights movement which was about integration. His was a little bit more Northern, a little bit more adamant about separation, which has been a tradition in Black politics dating back to Marcus Garvey, certainly before that. But at the same time, as he becomes this huge symbol, and people begin to embrace the idea of a new form of Black masculinity, of the kind of confidence and willingness to say, “I’m beautiful” and “Black is beautiful,” that’s part of that Black Power movement, that’s not just what the Panthers are doing, but many people are embracing a kind of sense of their own value and worth. He is both reflecting and also directing.

AP: Did you learn there were times Ali didn’t want the burden that came with who he was?
Burns: You can see in him sort of flashes of frustration, less about the burden than people getting it wrong. When he said, “I don’t have to box. It’s not about boxing.” At the very end of the film, (daughter) Rasheda (Ali) says, “Boxing is just this much” (while pinching her fingers together). I think he understood he had a bigger thing that he was about. He could have been a simple carpenter.

AP: Did you meet Ali?
Burns: I met him once. It was in LA, mid-late 90s. Definitely way into Parkinson’s. I had a cold and I had gone into a coffee shop to get some tea. I was waiting to take it out and I turned around and in a booth, there was Muhammad Ali. I had the only wordless conversation I’ve ever had with anybody. It was spectacular. It was almost a religious experience. I looked at him and without opening my mouth, I said, “You’re Muhammad Ali.” And without opening his mouth, he looked at me and said, “Yes I am.” … I never shook his hand. It was just the most spectacular thing.

AP: Are you tempted down the road to leave PBS and make films for one of the streaming services?
Burns: I could go to those premium services, or the streaming services and they’d give me the budget. The budget for “Vietnam” turned out to be $30 million and they’d do it. But they’d want it in two years. We needed to do 10 1/2 years. At PBS, they give me a little bit of money and I go out and raise the rest. They just want it to be what I want it to be. Not only do I publish each time a director’s cut, I also have the ability to have creative control over it.