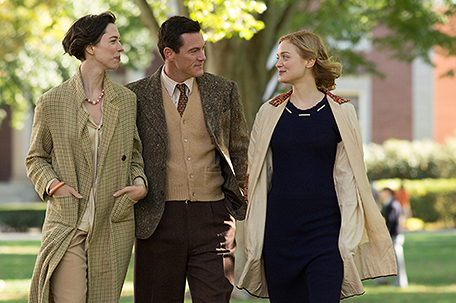 William Moulton Marston (Luke Evans) was a Renaissance man with an impressive array of talents. After earning his B.A., Ph.D. and law degrees, the Harvard grad was hired to teach psychology at Radcliffe, his alma mater’s sister school. Despite a demanding academic career, this jack-of-all-trades, inter alia, found time to write self-help books and to invent the precursor of the lie detector.

To this day, however, he remains best remembered as the creator of “Wonder Woman.” Selling the idea to a comic book publisher in 1941 was no mean feat, since until then, Superman, Batman, The Flash, Captain Marvel, The Green Lantern and all the other superheroes had been male.

The character Dr. Marston envisioned was not just a powerful crime-fighter, but an attractive, scantily-clad Amazon displaying an eroticism and a dominance her detractors would deem to be sexual and sado-masochistic in nature. Yes, Wonder Woman wore a skimpy outfit a la Superman, and she did use a rope to subdue and restrain adversaries, but the comic was far from pornographic.

Truth be told, Marston had ostensibly been motivated by the success of the Suffrage Movement to further advance the feminist cause. In fact, he once stated “The only hope for civilization is the greater freedom, development and equality of women.”

Another source of inspiration were the two women sharing Dr. Marston’s bed; his wife, Elizabeth (Rebecca Hall) and their longtime lover, Olive (Bella Heathcote). He would father a couple of kids with each and they all lived under the same roof, although the scandalous arrangement would lead to the family’s being shunned by polite society.

Written and directed by Alexandra Robinson, “Professor Marston & the Wonder Women” is an intriguing and informative biopic belatedly giving a brilliant visionary previously marginalized by history his due. Thanks to these more enlightened, LBGTQ-embracing times, William Moulton Marston can finally be fully appreciated, polygynous relationship and all.

To see a trailer for “Professor Marston & the Wonder Women” , visit: https://www.youtube.com/watch?v=Mts8NIcLZUQ