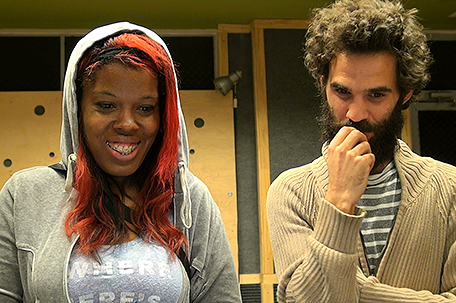 ABOVE PHOTO:  Samantha with her producer Kutiman.  (Photo courtesy of Magnolia Pictures.)

Born and raised in Chicago, 39 year-old Samantha Montgomery moved to New Orleans in 2006. By day, she works as a caregiver for the elderly and, by night, she fearlessly performs as Princess Shaw online and at local open mics.

Inspired by her personal joy and pain from past and present, Princess’ lyrics resonate with honesty and emotion in a very visceral way. It’s this truth that inspires her collaborator Kutiman as well as the emerging fans who have discovered their viral hit “Give It Up.”

Here, she talks about her very uplifting biopic, ‘Presenting Princess Shaw,’ which will be in theaters, on Demand and on iTunes starting May 27

Kam Williams: Hi Princess, thanks for the interview.

KW: When did you develop an interest in singing and songwriting?

PS: When I was very young, but I didn’t really find my own voice and my own sound until much later–around 2012. 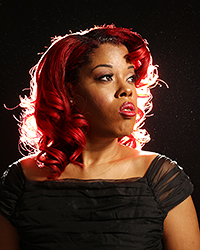 KW: How hard was it finding time to pursue your dream while working long days in the nursing home?

PS: It’s just about finding balance and making time to do what you love.

KW: Were you ever discouraged when the videos of yourself you put on Youtube failed to generate much traffic?

PS: No, because I didn’t put the videos up for other people, I put them up for me, as something to do for myself.

KW: How about when you weren’t picked to be a contestant on the reality-TV series The Voice?

PS: They want you to share your story on those shows, and I just felt that wasn’t the right time for me to share my story, so I didn’t. When Ido [director Ido Haar] came along, I knew he was someone that I could trust and felt comfortable sharing my story with.

KW: When was the first time you heard of Kutiman?

PS: I had heard a mash-up of his about a year before he released mine, but didn’t connect that the two were the same person until much later. I wasn’t familiar with his name at all when he released his video with me.

KW: What did you think the when you heard what he’d done with your songs?

PS: I was so happy and excited–like he took the music that was in my heart and put it out into the world. The music that he put with my lyrics was exactly what I wanted and had always heard in my heart.

KW: How surprised were you to learn that Ido Haar was making a movie about you?

PS: Initially, Ido was making a documentary about several of the Youtubers that Kutiman was including in his videos, although none of us knew we were being included. But slowly, over time, it narrowed down to just me and Kuti. Ido said that every time he left New Orleans his heart was telling him to come back. I had no idea that he and Kutiman knew each other when he started filming me, or even when I heard the song for the first time.

KW: What was it like meeting Kutiman in person?

PS: It was amazing, like finding a musical soulmate. He is like a brother to me now, and we have become great friends.

KW: What message do you think people will take away from Presenting Princess Shaw?

PS: That you survive the struggle in your life and if you keep going and keep pursuing the thing that feeds your soul, it’s worth it.

PS: I see someone who has a lot of love for herself now, and that’s beautiful.

KW: Thanks again for the time, Princess, and best of luck with the film.

To see a trailer for Presenting Princess Shaw, visit: https://www.youtube.com/watch?v=nMXGIch82ZU

To see Princess Shaw performing “Give It Up,” as produced by Kutiman, visit: https://www.youtube.com/watch?v=WoHxoz_0ykI

Only the best for your crowning glory; Indian Princess Hair