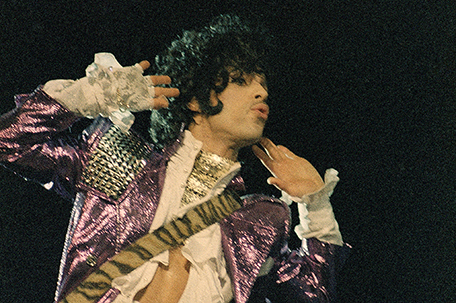 Anika Trahan recalls sitting at her computer, at a friend’s house where she’s staying during a Washington, DC visit, when she first heard news that Prince, her musical icon and a seminal force in her life, had died.

“It’s been hard. The only thing worse than this is losing one of your own family,” Trahan said.“I’m at a loss for words. When I was about 8 or 9 years old, I remember my mother telling her friends about this guy who opened up for a Rick James concert that she’d gone to. She said he’d come out wearing nothing but a diaper, but that he was really good. I didn’t know his name then. I came to know him for myself upon the release of ‘Purple Rain.”

“He was the most beautiful man I’d ever seen. At 13, I had no preconceived notions of masculinity or type. I barely liked boys at that time. But, I was so enamored with how he looked,” Trahan continued. “That’s what initially drew me to him, but “Purple Rain” was such an exciting album for me – I even had my own song. That’s he became my favorite musician from that moment/movement on, to this day.”

Prince Rogers Nelson, 57, died on April 21, discovered in an elevator at his home studio, at Paisley Park near Minneapolis, Minnesota. Following Prince’s cremation, family and close friends attended a small, private ceremony over the weekend where his publicist where his remains are buried would remain private adding that there are plans to hold a musical celebration at a later date. An autopsy has taken place and the body has been cremated. Authorities said it will be weeks before a cause of death is announced.

The reaction has been international. According to Forbes magazine, on the day after Prince’s death, fans snapped up an unheard of one million of his singles and albums. Even television anchors and personalities wept openly on the air.

For almost 40 years, Prince etched his name as a singular, extraordinary musical force, innovator and author of a career where he produced 40 studio albums, sold 100 million records, won an Oscar, seven Grammys, a slew of music industry awards and was inducted into the Rock and Roll Hall of Fame. His drive, perfectionism and the ease with which he crossed genres marked him as a fearless innovator continually expanding an array of musical and other boundaries.

Prince’s unexpected death has triggered an outpouring of grief, tributes from musical giants like Stevie Wonder, Bruce Springstreen and Lady Gaga, President Barack Obama and his wife Michelle, the high placed and the regular, around the US and the world. Their gaze has been focused on a man remembered for living life on his own terms, for his almost otherworldly musical output, his searing performances and a fierce desire for artistic independence and expression.

Trahan, 44, an educational program developer for a global consulting firm in Denver, Colorado, said unequivocally she is “the biggest Prince fan of them all.”

As a child, she said, she amassed “everything Prince,” including purple coats, lace accessories, posters, 12” EPs, full albums, concert picture books and ticket stubs. She mother of one said she’s lost count of the many shows she’s gone to but said saw her idol at concerts in Baltimore, Philadelphia, Washington, D.C .and Houston and only missed two tours, HitNRun and the Piano Tour.

The depth of Trahan’s admiration for Prince is illustrated by her tongue-in-cheek declaration: “If you aren’t a Prince fan, you’re no friend of mine.”

Documentary filmmaker Tony Regusters, like Trahan, said he is at a loss to fully embrace the reality that Prince is gone. He considers himself a devotee of the supremely talented singer, song writer and instrumentalist who is said to have mastered more than 20 instruments.

“I’m absolutely a Prince fan. When I heard, it felt as if I’d been hit by a sledgehammer in the center of my chest,” said Regusters, an Afro-Futurist and an original producer of BET’s “Teen Summit”. “I’ve been in the Army, on the journalism beat. You always think you’re past shock. Over the span of 37 years I saw him three times. To be perfectly honest, what drew me to him was his eccentricity and his very diverse worldview. He was off-the-chain and waaaaay ahead of his time. He was wild, unpredictable, was extremely gifted as a musician and played so many instruments. He never stopped being daring and pushing the envelope….He was also a very kind and spiritual person and did so many things people knew nothing about, like supporting the Black Lives Matter movement, taking care of the homeless, donating to certain social service agencies, and giving money to environmental causes. He was brilliant. I saw many of his interviews and he always sounded so measured and thoughtful. He had a strong thread of intelligence, extra creativity and the palpable presence of genius. Like Miles Davis, Marvin Gay and Michael Jackson, no one will ever replace him.”

Regusters, 68, an award-winning documentary filmmaker of “Obama in Ghana: The Untold Story,” said Prince’s death has been the topic of a great deal of discussion among his friends, colleagues and associates.

“No one is unaffected by this. People are crying, angry, throwing out conspiracy theories,” said Regusters. “He and Michael Jackson had just regained control of their music catalogues. People are saying it seems like a pattern. Two brilliant guys stood up to the music industry and now they’re dead. We know that America is truly a wicked place. It could have happened.”

D.C.-based publicist Reggie Sanders, who describes himself as a Prince admirer not necessarily a fan, offered a nuanced, philosophical view of the late musical prodigy.

“When I see him, I see a person who’s multi-talented, smart, an individualist, not in it for the adulation, and not concerned much if you like what he produces,” he said. “He’s like Michael Jordan, Tiger Wood and Steve Jobs. I’m not matching personalities but talent. They all have that “thing.” They had to endure being called weird. We are portals and they are the visionaries.”

“I’m admiring of his philanthropy without telling us. This is how he was built for his life. He was shaped by his upbringing in a special way. He had a stamp on him saying ‘you have to do this.’ What’s amazing is that he had just started rounding out in maturity and spirituality. We use the word genius. It looks that way to us but it’s a state of being …”