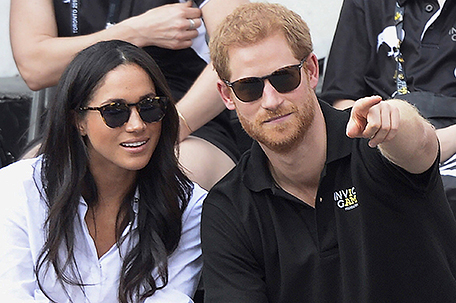 Markle, a humanitarian campaigner and lifestyle blogger who succeeded in show business before falling for Harry, will become a senior member of the royal family as the wife of one of the monarchy’s most popular figures.

The couple posed for photographers on the grounds of Kensington Palace hours after their engagement was announced by Harry’s father, Prince Charles.

Harry, wearing a blue suit and tie, said he was “over the moon.” Asked when he knew Markle was “the one,” he said: “Very first time we met.”

Markle said she was “so very happy.” She wore a belted white coat and held Harry’s hand as photographers focused on her engagement ring.

Palace officials said Harry designed the ring himself. It features two diamonds that belonged to his late mother Princess Diana, and a central diamond from Botswana, a country he and Markle have visited together.

They left with their arms around each other and gave their first joint interview later Monday.

Harry, a bad-boy-made-good by his tireless devotion to wounded veterans and his embrace of a variety of charitable causes, has said for several years that he wants to start a family, and the rumors of his engagement to Markle have been flying for months.

The marriage represents a first-ever blending of Hollywood glamor with the once-stuffy royal family, which has of late seemed less fixed in its ways, and brings a mixed-race American divorcee into a highly visible role.

“We are very excited for Harry and Meghan,” they said in a statement. “It has been wonderful getting to know Meghan and to see how happy she and Harry are together.”

Prince Charles told reporters he was “thrilled” with the engagement.

Monday’s announcement said the couple became engaged in London earlier this month and that Harry has informed his grandmother, Queen Elizabeth II, whose consent is needed for him to marry.

Archbishop of Canterbury Justin Welby said the couple would have a church wedding. No date has been announced.

The couple plan to live in Nottingham Cottage at Kensington Palace, where they will be neighbors to William and Kate and other members of the royal family. Markle, who has lived in Toronto since 2011 while filming the legal drama “Suits,” is reported to have started the sometimes time-consuming process of moving her dogs from Canada to Britain. She reportedly recently left the television show, a development that helped fueled engagement speculation.

Congratulations also came in from the queen and her husband, Prince Philip, and from Prime Minister Theresa May. Markle’s parents also welcomed the news.

Thomas Markle and Doria Ragland said their daughter “has always been a kind and loving person. To see her union with Harry, who shares the same qualities, is a source of great joy for us as parents.”

Markle was raised in the Los Angeles area. Her father is a Hollywood lighting director, her mother a yoga instructor and psychotherapist.

In some ways, Markle — a mixed-race American raised in California, an outspoken full-time actress, and a divorcee — makes a surprising addition to Britain’s monarchy.