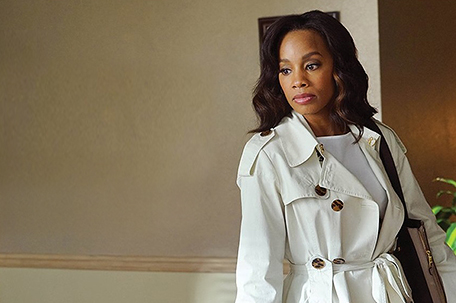 ABOVE PHOTO:  Anika Noni Rose is Dr. Eva Fletcher in the new BET drama, ‘The Quad’.

BET is bringing the Black college experience to television with the January 2017 launch of a scripted dramatic series titled “The Quad.”

Based on a concept created by Rob Hardy, “The Quad” was created by Felicia D. Henderson and Charles Holland.

Starring Anika Noni Rose and Ruben Santiago-Hudson, “The Quad” follows the travails of Dr. Eva Fletcher (Rose), an ambitious and troubled newly-elected president of the fictional Georgia A&M University. Dr. Fletcher is charged with saving the prestigious HBCU from bankruptcy as her marriage crumbles. The series promises to take viewers inside the unique, tradition-filled world of Historically Black Colleges and Universities (HBCUs).

The Paley Center in NYC has announced that it will premiere the pilot episode for “The Quad” on Wednesday, December 7, 2016, 6:30 pm ET. After the screening, a panel, including key cast and crew from the series, will discuss the upcoming show, as well as the importance of HBCUs in American culture.

Tickets to the event are now on sale, and can be purchased here: http://bit.ly/2gyzo9O.

“The Quad” premieres on BET in January.