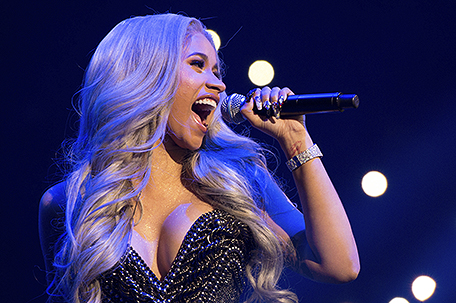 ABOVE PHOTO:  Recording artist Cardi B performs at Power 105.1’s Powerhouse at Barclays Center in New York. Cardi B and Offset from Migos are officially engaged. The “Bodak Yellow” rapper was onstage with Offset at a Power 99 Powerhouse concert in Philadelphia when Offset dropped to one knee and pulled out a diamond ring. Cardi B excitedly waved her hands and jumped around before Offset put the diamond on her hand. (Photo by Scott Roth/Invision/AP)

The Wells Fargo Center was the place to be for folks who love today’s hip-hop scene last Friday, when chart topping artists including Migos, Cardi B, and Philly’s own Meek Mill touched down for Power 99FM’s annual Powerhouse concert.

This is the 12th year for Powerhouse, and the lineups get bigger and bigger every year as fans screamed, danced, sang along, and praised their favorite artists.

To start the evening, DJ Diamond Kuts searches for talent across the Delaware Valley that has star power and appeal to open the show as the radio station’s “Diamond in the Rough” contest winner. This year it was Delaware native Freddie Lee Gray, who goes by the stage name Pauly Dinero (@PaulyDinero). The charismatic artist pulled from his personal struggles and past pain to connect with the audience and make them enjoy his performance.

Other artists that started the show included Nizzy Straws, Reco Havoc, Playboi Carti, and YFN Lucci. The stadium really started buzzing when French Montana took the stage, and from there fans were ready to party! Rick Ross, Lil Uzi Vert, Migos, Cardi B, Meek Mill, and Travis Scott ended the evening on a high note (no pun intended).

But the big surprise came when one half of the Migos crew, Offset, proposed to Cardi B, his longtime paramour. Cameras and phones were ablaze capturing the couple’s’  happy moment, which instantly sent Black Twitter and Instagram into a frenzy  as they wait for the wedding to hit the TV screen. Cardi’s entourage was a part of the surprise as she was immediately rushed to the stage before her set started. She told fans she was having a hell of a year, then showed off the rock on her finger for all to marvel.

Powerhouse proved to be too much energy to contain in one stadium. Crowd control was a lot to handle as there were several security issues, much to the chagrin of press covering the event. The power to the DJ booth completely went out during North Philly native Meek Mill’s set.

At one point, he was seen leaving the stage and fans got upset. He then returned to perform through the technical issues until the power was back in the house.

This concert was enjoyable for all fans of this new era of hip-hop, and many are already anticipating the wave of artists that will blow through the city next year.