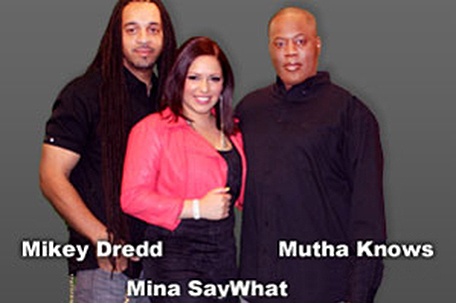 The quick-witted, sharp-tongued Mutha Knows is a fan favorite. His ‘The Tea’ segment airs four times daily during morning drive and is a can’t miss feature, with its juicy gossip delivered in a manner that only Mutha can. Mutha is also known for proudly giving his voice to Philadelphia’s African American LGBT community.

“I’m so excited that my hard work, dedication and faith has brought me to this place!  I deeply appreciate the confidence DC Corbett and Power 99 have placed in me by acknowledging my creativity and contribution to the team with this new contract,” said MuthaKnows.

MuthaKnows began his career in 2007 working at various radio internships and starting his own online “The MuthaKnows Show” on Blog Talk Radio.  In 2009 he started working at Power 99 helping with morning show gossip features.  MuthaKnow’s role grew until he was elevated to part-time with the Power 99 FM’s HotBoyz morning show and continuing with the current Morning Rise & Grind Morning Show lineup of Mikey Dredd, MinaSayWhat and MuthaKnows.

Power 99 FM’s “Rise and Grind Morning Show” has maintained consistently high ratings, while serving the community by “stopping the music” to discuss critical issues, hosting “Peace on the Streets” events and conducting artist interviews with the biggest stars of Hip Hop and R&B.  Other popular features include Mina’s #Saywhat News, “The Tea” with Mutha Knows, and Carmen’s “Phone Jack.”

Fans can listen to Power 99 FM on the station’s website, power99.com, as well as on iHeartRadio.com. Power 99 FM is the recipient of the 2015 Crystal Radio Award for community service, becoming the first station in the nation to receive six of the prestigious awards.