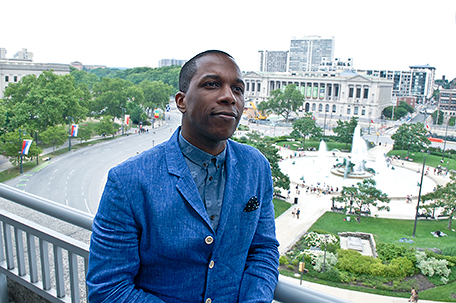 NEW YORK — Many theater-lovers looked at Saturday with dread. That was the day key members of the Broadway cast of “Hamilton” play their last performance.

Odom, who just won a best leading man Tony Award in the show, is ready for the next chapter in his life to start. It’ll be filled with his songs, choreography and costumes.

While acknowledging his last show will be “bittersweet for sure,” Odom added: “I’m very excited to go out and find something new and to pour energy into my music; to go around the country and around the world with this music and meet people and connect with people, which is what I love to do most.”

Odom, who has signed a four-album deal with S-Curve Records/BMG, this summer released his first, a self-titled collection of 10 classic songs including Jerome Kern’s “Look for the Silver Lining,” Jule Styne’s “The Party’s Over” and “Joey Joey Joey” from Frank Loesser.

Odom whittled the list down from some 200 possibilities, picking tunes he felt right singing with his warm, expressive voice. He even learned to sing in Portuguese for the song “Brazil.”

One of his favorite tracks is “Nobody Knows You When You’re Down and Out,” a blues standard by Jimmy Cox that’s been performed by Bessie Smith, B.B. King and Eric Clapton.

“I loved singing it now because I’m so far from down and out. But I remember being down and out so well, so it was really a pleasure to sing from the other side of it, encouraging someone who might be in that place that there’s hope. It could all turn around.”

Odom’s fortunes have certainly taken an upward turn since he was cast as Aaron Burr in Lin-Manuel Miranda’s “Hamilton,” the hip-hop-flavored biography about the first U.S. treasury secretary. Odom now has a Grammy for the cast album as well as a Tony.

“It is deeply satisfying. We don’t do it for trophies. We don’t do it for awards. You can’t because they so often don’t come. They never come,” he said. “Listen, I don’t need 12 Tonys, honestly. That would be wonderful, but if this is the only time it ever happens, great.”

Odom was raised in Philadelphia and made his Broadway debut at 17 in “Rent” before heading to Carnegie Mellon University’s prestigious School of Drama. He was on TV in “Smash” and “CSI: Miami” and on Broadway in “Leap of Faith,” but “Hamilton” showed how good all his skills are.

As Burr, Odom plays a rival to Hamilton, singing the tender “Dear Theodosia,” the electric “Wait for It” and leaping onto a table for the smashing “The Room Where It Happens.” His Burr is watchful and haunted.

“Leslie brings a sense of yearning and I think we all can relate to. The yearning to have something that I can’t have, the yearning to go somewhere I can’t go, the yearning to be someone I am not,” said producer Jeffrey Seller. “No one has ever played jealousy and envy with so much empathy.”

Odom makes way for Brandon Victor Dixon in August and said he’s looking forward to other people taking on his old role, especially all the actors of color who have been frustrated that there are few places to show their training.

“Now there’s a place for you to go and flex and use your training and discover what you’re capable of,” he said. “I think it’s fantastic. It is not going to be mine forever. It shouldn’t be mine forever. I’m so excited to see other people get their hands on it.”