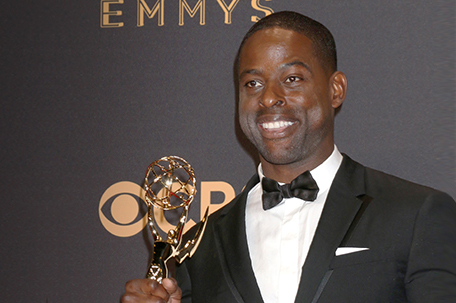 NEW YORK — It was, not surprisingly, a night for politics, with everyone from host Stephen Colbert to Lily Tomlin, Jane Fonda and Alec Baldwin getting in zingers about Donald Trump – all to be upstaged by Sean Spicer himself, in a controversial appearance that set social media afire. But Emmy night was not only about politics.

It was also about diversity and new voices, with notable wins, among others, for Sterling K. Brown, the first Black actor in nearly 20 years to win for lead actor in a drama; for Lena Waithe, the first Black woman to win for comedy writing, and Donald Glover, the first Black director to win the comedy award (and best actor, too.) Riz Ahmed’s acting win was also first for Asian men. Stories about women won big: “Big Little Lies,” ‘’The Handmaid’s Tale” and “Veep” won the top three categories. But there was a notable paucity of Latino and Asian winners.

YES, THAT WAS REALLY HIM

Colbert had been hitting on Trump early and often in his opening monologue, but there were gasps of genuine shock in the crowd when he called out for “Sean,” and the former White House press secretary wheeled a podium onstage to spoof his highly dubious claims on Trump’s behalf about the inauguration crowd size. “This will be the largest audience to witness an Emmys period,” he announced in faux seriousness, “both in person and around the world.” There were plenty of laughs, but on Twitter, many questioned whether Spicer should have been there at all. “congrats to @seanspicer for his new job as the punchline to an unfunny joke,” wrote Dan Pfeiffer, one of President Barack Obama’s former aides. 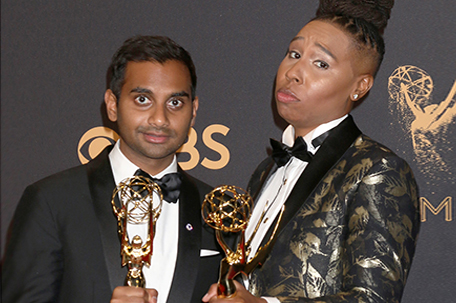 A BIG WIN – AND THEN A MIC CUT – FOR STERLING K. BROWN

A year after winning in a different category for playing Christopher Darden, Brown became the first Black actor in 19 years to win the top drama series trophy, for “This Is Us.” He paid tribute to the last African-American man to win the category, Andre Braugher, and also saluted his castmates, “the best White family a brother could have.” The emotional moment was marred by the unfortunate decision to cut Brown’s speech short, a particularly sour note on a night that celebrated so many diverse voices. Waithe, who shared the best comedy writing award with “Master of None” co-creator Aziz Ansari, expressed gratitude to Emmy voters: “Thank you for embracing a little Indian boy from South Carolina and a little queer Black girl from the south side of Chicago.” And Ahmed became the first Asian man to win an acting Emmy for his role in “The Night Of,” for which he won best actor in a limited series or movie.

A ‘9 TO 5’ REUNION BECOMES A TRUMP ROAST

Winning the limited series award for “Big Little Lies,” co-producers and stars Reese Witherspoon and Nicole Kidman issued a call for more meaty, important roles for women. “Bring women to the front of their own stories,” Witherspoon said. “More great roles for women, please!” said Kidman (who also won for acting in the hugely popular series.) The winning shows in the other two major categories also featured women’s stories: “The Handmaid’s Tale,” and “Veep.” Backstage, Elisabeth Moss, who won the drama acting prize, said “incredible progress” has been made, but “there’s still a lot of work to be done. There are still meetings you walk into and wonder if they say ‘no,’ because it’s a show by or about a woman.” And comedy actress winner Julia Louis-Dreyfus said she hoped “this is the beginning of something even better in our country, and the world. I think the world would be a better place if more women were in charge.”

‘SNL’ HAS A GOOD NIGHT

“Saturday Night Live,” like the nighttime talk shows, has capitalized on the 2016 election to huge success. Lorne Michaels, accepting the variety sketch series award, recalled how when the show won an Emmy in 1976, “I remember thinking … there would never be another season as crazy, as unpredictable, as frightening, as exhausting, or as exhilarating. Turns out I was wrong.” Kate McKinnon, who won as supporting actress in a comedy, paid tribute to Hillary Clinton – whom she memorably played – for her “grace and grit.” Baldwin, who won for his Trump portrayal, spoke directly to Trump: “I suppose I should say, ‘At long last, Mr. President, here is your Emmy.’”

It always seems to happen: There’s a major omission in the memorial segment, and social media notices right away. This time, it was actor Harry Dean Stanton, who died Friday at age 91, and comedians Dick Gregory and Charlie Murphy. “Thinking of my brothers Dick Gregory + Charlie Murphy,” tweeted rapper Common, after the snub. “I’ll never forget you. I miss you both.”