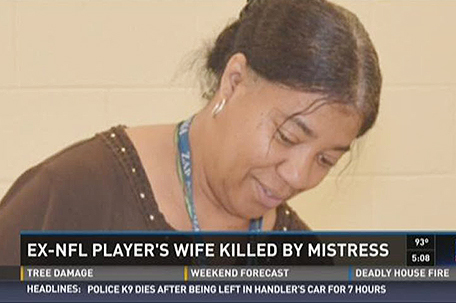 ATLANTA — A former NFL player’s mistress, apparently jealous that he was taking his wife on a trip to Las Vegas, drove to his home near Atlanta, kidnapped her romantic rival and led officers on a chase into Alabama before killing the wife and herself, police said.

Lisa Brown, 46, showed up at the workplace of former Buffalo Bills player Buster Barnett on the morning of July 15 and was upset about the planned trip, Clayton County police spokeswoman Officer Charlene Watson-Fraser said. She then went to Barnett’s home in Ellenwood and abducted his wife, 50-year-old Sandra Barnett.

Ruby Chester, a longtime friend of Sandra Barnett, said she was on the phone with her about 11:20 a.m. on July 15 when someone knocked on Barnett’s door. Chester told The Associated Press that she could hear a woman’s voice yelling “Open this door! Open this door or I’m going to kill you!”

Chester said she heard Barnett talking to the woman: “Don’t hurt me, ma’am! I don’t know you!” Then she asked, “Are you Lisa Brown?”

Chester said she and Sandra Barnett had known each other for 10 years and kept no secrets from each other, so she knew that Buster Barnett, who she said is now an Atlanta school teacher, had been involved in an affair with a woman named Lisa Brown. Chester said Brown had harassed her close friend for at least a couple of years as Barnett tried to keep her marriage together.

“Lisa Brown had been aggressive toward Barnett and had been bothering Barnett off and on for some time — showing up at the house, texting her, calling her,” Chester said. But her friend would never do anything about it, leaving it for her husband to handle, Chester said.

Chester tried calling police the day of her last phone call with Sandra Barnett, but wasn’t in the same county so she didn’t get connected to the correct police department, she later told an officer, according to a police report. She then called Gerald Payton, a friend and co-worker, and asked him to drive by the Barnetts’ home.

When Payton arrived, he saw a black Dodge Durango parked in front of the home and a woman in the garage, he told police. He then wrote down the tag number on the SUV, called 911 and drove around the corner to wait for police. Before officers arrived, he saw the SUV drive by but couldn’t tell if Barnett was in it, the police report says.

Sandra Barnett’s brother, John Brooks, told police the vehicle belonged to his sister’s husband’s “ex-girlfriend and that she had some issues,” the police report said.

Clayton County police put out a lookout on the Durango. Sheriff’s deputies in west Georgia saw the vehicle the next morning and chased it along Interstate 20 into Alabama, police said. The SUV stopped at mile marker 208 on a stretch of the freeway in Cleburne County, Alabama, and a standoff ensued, Alabama Law Enforcement Agency spokesman Steve Jarrett said in an emailed statement last week.

Police said Brown then reached into the backseat of the SUV, grabbed a gun and shot Sandra Barnett before shooting herself. Both women were dead when officers got to the SUV, authorities said.

Watson-Fraser said she didn’t know where the two women were between the time of the abduction late on the morning of July 15 and when authorities spotted them the next day.

Buster Barnett told police he and Brown were in a relationship. He owned her home and vehicle and told police he was “helping her out,” Watson-Fraser said.