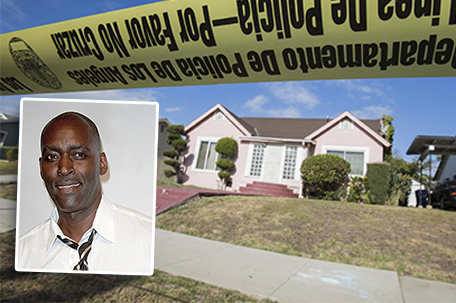 ABOVE PHOTO: Yellow police tape seals off the home of actor Michael Jace (insert) on Tuesday, May 20, 2014, in Los Angeles. Jace, who played a police officer on the hit TV show “The Shield,” was arrested on suspicion of homicide after his wife was found shot to death in their Los Angeles home, authorities said. Police arrived at the couple’s home around 8:30 p.m. Monday after a report of shots fired, Officer Chris No said. April Jace, 40, was found dead inside, officials said. Jace was taken into custody and booked early Tuesday on suspicion of homicide, No said. He was being held in a Los Angeles jail in lieu of $1 million bail.  (AP Photo/Ringo H.W. Chiu)

By Tami Abdollah and

LOS ANGELES  — Actor Michael Jace, who played a police officer on television, was arrested Tuesday on suspicion of fatally shooting his wife after calling 911 and telling an operator that he shot her, police said.

Detectives were investigating whether the couple’s financial or other marital difficulties might have played a role in the killing.

Jace, who appeared on the hit FX series “The Shield,” was being held on $1 million bail after being accused of shooting his wife multiple times on Monday night during an argument in their home in the quiet, modest Hyde Park neighborhood of Los Angeles.

Los Angeles police Detective Dean Vinluan said a printout of the incident history indicated that Jace called 911 and told the operator that he shot his wife.

The couple’s two sons, both under 10, were at home at the time, although police were unsure if they witnessed the argument or gunfire.

The body of April Jace, 40, was found with multiple gunshot wounds in a hallway of the home, and police recovered a handgun believed to belong to her husband, Vinluan said.

“She came home with the kids and then the dispute happened and the shooting happened,” Vinluan said.

Michael Jace was seen walking out of the home when officers arrived around 8:30 p.m. He was detained and later arrested.

“We don’t know if he came out of fear or was trying to get out of there,” Vinluan said.

Detectives intend to review multiple 911 calls placed after the shooting to determine what had happened before Jace is formally charged.

Vinluan said there had been no previous reports of domestic violence at the home.

The actor had been under financial pressure in recent years. He declared for bankruptcy in 2011 and had been delinquent on payments as recently as December.

Calls from The Associated Press seeking comment from Jace’s agents at SMS Talent were not immediately returned.

Jace, 51, is best known for his role as LAPD Officer Julien Lowe in the TV series “The Shield.” He also appeared on the show “Southland” and had small roles in the movies “Planet of the Apes,” ‘’Boogie Nights” and “Forrest Gump.”

Vinluan said the couple’s sons are now with family.

“They were just lovely parents,” Harding said. “I never heard arguments, I just heard happiness over there.”

April Jace had worked as a financial aid counselor at Biola University, a private Christian school, since March 2013.

“April’s radiant personality brought great energy to the financial aid office,” Geoff Marsh, senior director of financial aid wrote in a statement. “Her love for helping students and families and her great work ethic earned the respect and love of her co-workers. Her smiling face and helpful spirit will be missed by all.”

Bankruptcy filings in 2011 stated that she had worked as a schoolteacher for the previous 10 years.

Michael Jace’s bankruptcy filing listed debts between $500,000 and $1 million. Much of the debt appeared to be related to his home, with an additional $22,000 owed in state and federal income taxes. More than $20,000 of his tax delinquency was owed to the state of California for the year 2008. He agreed to a payment plan, but had fallen behind as recently as December, records show.

In a statement of his assets, Michael Jace checked a box indicating he didn’t own any firearms. There are no records of any criminal cases involving Michael Jace in Los Angeles.

“The Shield” ended its seven-season run in 2008. Jace appeared in all but one episode, according to the Internet Movie Database site, IMDB.com.

“He’s one of those people whose faces you’d recognize but you don’t know their names,” said veteran casting director Sheila Manning. “He’s a solid actor. Nothing big, but he’s a working actor.”

Coroner’s Assistant Chief Ed Winter said April Jace’s body had been removed from the home and an autopsy would not be performed until Wednesday at the earliest.

Eva Longoria and Los Angeles Laker Matt Barnes: there just may be something going on…