‘Points of View’: A one on one with Alton Glass 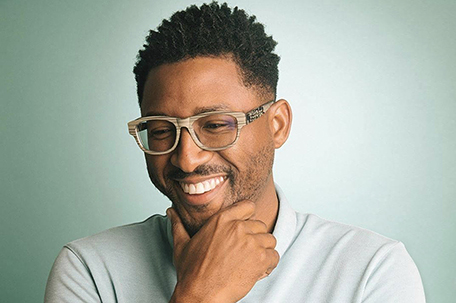 The world of virtual reality (VR) is beginning to open up to a much broader audience. Black content creators are making waves in the industry, finding new ways to present innovative content that explores our experiences and tells our stories.

The Black-owned immersive media technology company, GRX Immersive Labs, is on the forefront of VR storytelling. Founded by writer and director Alton Glass, GRX Immersive Labs’ latest project, “POV: Points of View,” tells the story of Cassius Moore. Moore is a brilliant Black coder who serves two years in prison for biometric hacking. He qualifies for an early release under a new drone surveillance program where the government assigns a weaponized drone, F.E.N.I.X. AI, to watch and record his every move.

The incredible VR experience during the film allows audiences to draw their own conclusions as they review all of the facts of Case File 456.23 through the eyes and perspectives of all of the people involved. Glass spoke with the SUN about the inspiration behind “Points of View,” the importance of diversity in the VR space and his mission to create more opportunities for Black people in VR.

Glass, who has worked in various aspects of film and television, initially wanted to become an actor. After spending some time on set, he shifted his sights to directing. He was later inspired by a VR experience in 2016 to pursue a career as both a creator and director in VR.

“It was something that was nostalgic about the experience,” he said. “I grew up watching NASCAR races when I was home by myself, wondering what it would be like in one of those races. Ironically, when someone gave me VR for the first time, it was actually of a NASCAR race. It put me right in the pit. I said, ‘what is this technology that’s VR? — I want to learn more about it.’ I went to this expo called VR LA, and my mind was blown by the endless potential of what I could do with storytelling and world building. I dedicated my production company at the time and moved it into immersive storytelling.”

When Glass first began in the VR world, there were not a lot of opportunities to learn the ropes.

Fortunately, he was able to meet Amanda Shelby, who gave him an opportunity to be a lab rat of sorts at a VR rental house. That experience exposed Glass to events, new technology and expos. That experience also eventually led Glass to create his first VR short film called “A Little Love.”

“I wanted to play around with scale… an experience where you’re really small and the world looks really big in VR,” he said. “I came up with this concept called “A Little Love” about a young girl whose mother decides to go back out into the workforce. The young girl is not really sure how to convey this shift in her life. She makes a birthday wish to spend more time with her mother like she used to, and her mother wakes up in her dollhouse as a toy.”

Although a portion of VR is inspired by fantasy concepts, “POV,” which had its world premiere at the 2021 Tribeca Film Festival, drew inspiration from real life.

“I made this video three years ago and at the time I thought it was sci-fi, but now a lot of it is already here,” he said.

Set in 2025 Los Angeles, the current militarization of police and the turmoil that Black people continue to experience in this country also served as the inspiration behind “POV.”

“We put all of this money behind the militarization of police and law enforcement to police certain communities,” Glass said. “When it comes to technology and algorithms, you have someone deciding what the problem is and we don’t have an oversight on what someone deems the problem and what we’re doing to solve that problem until it’s too late and it’s in our community. It was really about how can we reimagine public safety through emerging technology and law enforcement. What would it be like to come to the table with more than one point of view.”

“Around that time, I was seeing a lot of viral content of young Black and brown people in the community being murdered by police brutality and gun violence within that system,” he added. “It brought me back to Tamir Rice and the toy gun and he didn’t make it. There was technology involved in that as far as the phone call, but had there been another technology, maybe something else could have changed the outcome or trajectory of that situation.”

In addition to telling powerful stories in the medium of VR, the lack of diversity in the VR world acted as a catalyst for Glass to create additional opportunities for other Black people in the field through his company.

“I started my company GRX Immersive labs to make sure that it was a hub and resource for opening the door for other creatives,” he said. “We’ve been able to mentor, refer [to] other opportunities and bring people in for training through our program. It’s to make sure that there are diverse voices in immersive storytelling.”

GRX continues its mission to give back and expand opportunities for Black people in immersive storytelling through tours with a number of HBCUs where they teach them how to create VR content. To find out more about where you can experience “POV: Points of View” and other opportunities offered through GRX Immersive labs including virtual reality workshops, visit: www.grximmersive.com  and follow them on Instagram at: @grximmersivelabs and @grximmersivelab on Twitter.

Events at AAMP: Gardens of the Mind: Echoes of the Feminine View On view now through January 16, 2018