Places to go in Philly for the rest of June 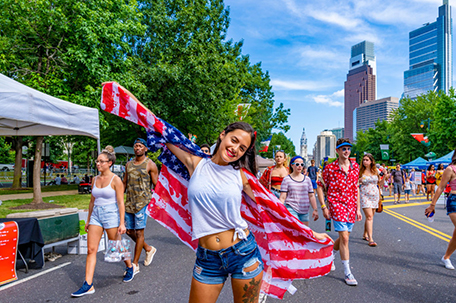 West Philly’s Malcolm X Park and the areas surrounding it host a special celebration to mark the anniversary of the ratification of the 13th Amendment — also known as Juneteenth. The event features a parade starting at 52nd and Jefferson streets and a music festival at the park.

Hundreds of artists from around the nation set up shop during the massive two-day Manayunk Arts Festival, the region’s largest outdoor juried arts fest. Attendees can peruse and purchase jewelry, ceramics, woodworks and sculptures up and down Main Street.

The stage at The Mann Center for the Performing Arts welcomes major R&B stars like Jill Scott and Jazmine Sullivan for the WDAS Summer Block Party on Saturday, June 29. The all-ages show is an affordable outing, with lawn seats starting at $35 a person.

Where: The Mann Center for the Performing Arts, 5201 Parkside Avenue

It’s no surprise that the birthplace of America hosts an epic July 4th celebration every year. Known as Wawa Welcome America, the event kicks off on June 29 for a full six days of happenings of free museum admission, concerts, fireworks and so much more.

The free concert on the Benjamin Franklin Parkway on July 4th features a different set of talented musicians each year, and 2019’s headliners are Jennifer Hudson and Meghan Trainor!