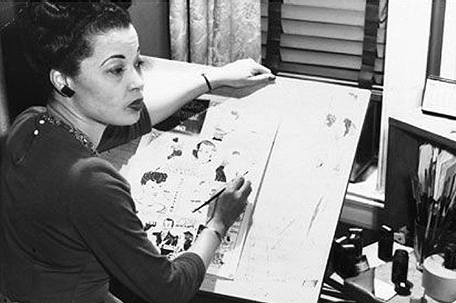 Thus far, since I launched the “Consider *This Story* For Your Next Film Project” series of posts a year ago, two suggestions I’ve made have been set up for development in Hollywood. Most recently, just yesterday, it was announced that author Tom Reiss, titled The Black Count: Glory, Revolution, Betrayal, and the Real Count of Monte Cristo, has been optioned by Sony Pictures.

It’s almost as if our recommendations are being taken into consideration by those with the power to see them through, from script to screen.

So I figured, as I did with The Black Count previously, repeatedly, I’ll repost some of our other “Consider This…” pieces, hoping that maybe they will eventually be met with the same success that the other 2 are currently enjoying.

Here’s a recommendation made earlier in the series, which may have been missed:

In light of all the recent conversations about black representation in the comic book space, as well as in genre cinema, and also filmed biopics on black public figures, past and present, I thought I’d toss a few names into the pool, for any filmmakers, producers, studios, etc, searching for real-life stories that could potentially make interesting onscreen studies (satisfying all three – whether their entire lives, or specific periods of their lives – a day, month, year, etc).

First, a snippet from a recent CNN profile:

Cheryl Lynn Eaton is a comics and graphic novel fan who fell in love with the medium in childhood, courtesy of Archie and the X-Men. She knows plenty about comic books and their history, writes commentary about them and even produced her own webcomic, “Simulated Life.” You might say geekery is in her genes, as Eaton credits her dad for her love of science fiction. Eaton, an African American comic book creator from Edison, New Jersey, became fed up with the lack of diversity within the comic book publishing industry and the creative communities she encountered. In 2007, that frustration led her to found the Ormes Society, an organization dedicated to supporting African-American women who create comics, and promoting diversity within the industry and among fans.

“I wanted to use the organization as a way to fend off creative isolation and to build a support network of like-minded individuals,” said Eaton, who is an editor for an academic press. The society is named for the late pioneering artist Jackie Ormes (1911-1985), who was America’s first black female professional cartoonist. Members include webcomic creators Charlie Trotman (“Templar, Arizona”) and Carol Burrell (“SPQR Blues”), and comics illustrators Afua Richardson (Top Cow’s “Genius”) and Alitha Martinez, who began her career at Marvel and now publishes her own series, “Yume and Ever.”

After further digging, I learned that Ormes was devoted to leftist causes in her time – 1911 to 1985. The F.B.I. is said to have had a 287-page file on her, thanks in part to her sometimes politically pointed comics/cartoons, in which she touched on issues like racial segregation, cold war politics, educational equality, the atom bomb, environmental pollution, among other pressing issues of her time.

However, her most popular comic characters were Torchy Brown, Candy, and Patty-Jo ‘n’ Ginger, which were all featured in newspapers, and spawned other products, including a black doll with her own stylish collection.

Ormes was also a socialite, and member of Chicago’s black elite; hobnobbing with the powerful of the day, politicians and entertainers. And all I’ve read about her life, including the briefs within this post, I found very fascinating, considering the era in which she lived, and her rather interesting cosmopolitan, social activist life, as both a socialite and a pioneering comic artist.

A film (whether fiction or documentary) on her life (or some specific period of it) is definitely in order, me thinks.

While we wait for that to happen, a biopic in book form does exist; Penned by Nancy Goldstein, the 2008 book is titled “Jackie Ormes: The First African American Woman Cartoonist,” and you can pick up a copy on Amazon.com right now.