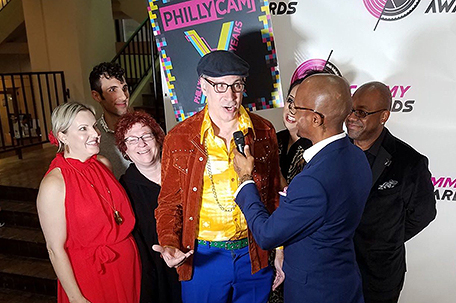 ABOVE PHOTO: Ricky Paul (center) recipient of the Excellence in Curation for Radio being interviewed by Jeffrey Jones surrounded by fellow Dumpsta Players.   (Photos by Vanessa Maria Graber)

The Cammy Awards celebrates PhillyCAM’s producers whose television and radio content brings together the people of Philadelphia to make and share media that promotes creative expression, democratic values, and civic participation.

The program also recognizes the creativity and commitment of its volunteer producers whose programming exemplifies values of inclusion, collaboration, discovery, learning, local focus, and quality.

This year’s event was hosted by Cherri Gregg, community affairs reporter for KYW NewsRadio 1060 AM, and featured performances by local R&B artist Jacqueline Constance and the over-the-top Dumpsta Players.

It was the lead-off event of the year-long celebration of PhillyCAM’s 10th anniversary.

Here are the winners:

The Excellence in Curation Award for Radio is given to a radio show or audio project that demonstrates high-quality music curation. It was present to Ricky Paul aka DJ K-Tell for his program Sylver Alert that airs Tuesday from 4:00 – 6:00 pm on WPPM. He spins classic 60s through the 90s vinyl cuts with a shout out to Philly’s LGTBQ communities and straight allies. The program features uplifting and personal tales often with an edge of humor with valuable lessons in love, life, and gratitude from a variety of special guests.

Excellence in Production Award for TV​:

Ricky Clover received the Excellence in Production for TV For his computer animated short, ​Marky​, set in the fictional city of Hometown, USA in 1992, tells the story of Marques Lawrence Sharper (Marky for short), a 12-year-old zoned to a middle school far away from his friends. The worst thing is, he was struck in the head in a construction accident, leaving him with a bad haircut that always grows back.

Jennings is an artist/photographer/poet who shares his love and knowledge of Jazz to provide a visual / poetic record of the sublime moments of transcendence through his radio program “​Jazz From an Eclectic Mind,” which airs Mondays from 6:00 – 7:00 PM on WPPM. He uses radio to capture moments and take his listeners to another place and time.

Optical Toys ​is a television program that compiles regionally produced live actions and short films that reflect the peculiar, the bizarre, and the funny, and how we deal with the extraordinary side of life. Boston describes himself as a scooter rider, animator and filmmaker looking to pool his interest into one medium. He is preoccupied with motion, whether on screen, on a bike, or in my head. Television production and filmmaking is an outlet.

The Innovation Award recognizes a radio program for experimentation with sounds and new technology, programming content not commonly heard in mainstream media, or a creative use of audio to tell a story. The award went to Arianne Bracho, originally from Venezuela, for her program ​Madre Terra Radio (Mother Earth Radio)​that airs Fridays from 5:00 – 6:00 PM. It’s a Spanish language program made by women, for women and men who believe that equality and equity are the basis of a more just society.

Hosts of the popular ​Black Tribbles ​podcast and WPPM radio program, The Black Tribbles were recognized for their transition to television for their new program ​Tribbles After Dark​. Too cool to be geeks, too cute to be nerds, the Tribbles discuss their love of Sci-fi, comic books, movies, video games, and cartoons from a Black perspective.

A compilation of 10 short films created by participants of the ​5 Shorts Project​, a project that helps aspiring filmmakers create short films that depict diverse stories from our communities.

New York University graduate Charlese Hawkins received the Inclusion Award for her film project ​STAGES about three women connected by an HIV diagnosis who forge a friendship during a pivotal moment in their life in order to combat the stigma surrounding HIV and embark on new journeys together.

LIKeIT IS​is a community talk show offering those feeling unheard a voice responding to current events. Rhonda was born and raised in New Jersey. She was a live news producer with a stellar reputation until she was stricken with multiple sclerosis which ended her career, but not her dream to produce quality television.

The U.S. is in the midst of an opioid epidemic. Once upon a time, the nation’s homeless and drug users were connected to poverty or ‘poor character.’ Today, all of society shares in the drug’s deadly path. Philadelphia’s Kensington neighborhood struggles in its wake. The police, city officials, and residents search for answers to battle the epidemic. Philadelphia witnessed over 1,000 fatal overdoses in 2018. We currently have over 700 homeless living in the Kensington area. Recovery can take years, stigma can add shame and despair. Children living in the area are exposed to the reality of drug use daily. Our documentary hopes to shed light on the issues, problems and solutions in Kensington as all of America looks to our city to quickly find answers.

Looking Forward Reentry Radio Show​​is an informative and interactive forum for educating the public on current issues involving men and women returning from incarceration. This show features agencies working with returning citizens, administrators in the prison system, legislators and returning citizens who have successfully navigated their return to the Philadelphia area. Show producer Jeffrey Abramowitz, J.D is the Executive Director of Reentry Services for JEVS Human Services and Program Director of Looking Forward Philadelphia.

The Vijay Mohan Spirit Award was presented by his Temple film professor and friend Rea Tajiri. Mohan was tragically killed when he was struck by a car while riding his bicycle in May 2015. The Spirit Award recognizes a PhillyCAM member who touches the lives of individuals and communities in Philadelphia and who models Vijay’s spirit of kindness and generosity. This year’s recipient was ​Toni J Jones​, PhillyCAM member since 2013. She is the producer of the weekly radio show ​The 7 Figure Hustle​, which she also produces as a TV program. She also helps produce ​The Trudy Haynes Show​. Toni has made a mission out of recruiting people to become members of PhillyCAM.