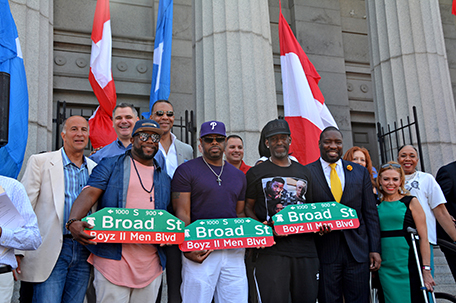 Philadelphia is known worldwide for its incredible musicians. Among those legendary musicians are Philadelphia’s own Boyz II Men. After 11 albums, four Grammys, 50 weeks as number one on the Billboard charts, and a career that spans over 30 years, Boyz II Men had a street named in their honor last weekend in South Philadelphia in front of the High School for Creative and Performing Arts, (CAPA), their alma mater.

What was once the corner of Broad and Carpenter is now Boyz II Men Boulevard. Fans and media alike gathered on the lawn of CAPA, on a sunny but windy Saturday eagerly awaiting their arrival.

Nathan Morris, Wanya Morris, and Shawn Stockman arrived with smiles of appreciation on their faces. The trio graciously smiled and waved to their fans amongst throngs of media. Various city officials — including City Rep. Sheila Wess and Councilman Kenyatta Johnson spoke about the privilege of having the trio in attendance and their excitement about Boyz II Men Boulevard.

The students of CAPA paid tribute to the group with two song selections: “Motown Philly” and “My Country, ‘Tis of Thee.” After the students had everyone clapping along to Boyz II Men’s iconic harmonies, Nathan lended his phenomenal bass vocals to CAPA’s tenured rendition of the American classic.

The honorees shared a few words of gratitude to both Philadelphia and the fans. They shared stories about being too broke to pay for tokens, and anecdotes about sitting on the same steps where they were currently standing just wanting to sing.  “Motown Philly is our moniker.,” they stated collectively.

After their speeches ended, the moment everyone had been waiting for arrived… and Boyz II Men Boulevard was unveiled. The group took turns signing it, and each member was given their own replica. The dynamic trio will return to Philadelphia on July 4th to perform during the “Wawa Welcome America Festival.”  It’s a performance you don’t want to miss! In the interim, the next time you pass the Boyz II Men Boulevard sign, take a moment to look up remember that anything is possible.