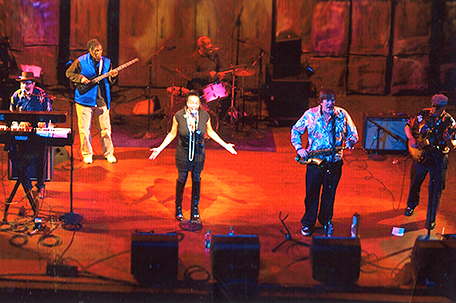 One Saturday night 35 years ago at Taker’s Cafe in Maplewood Mall in Germantown two men began to play music for an eclectic crowd, one pounding an old upright piano and the other delivering soulful vocals via a beat-up microphone and tiny amplifier. Within a few songs they had people up and dancing. That was the beginning of Philly Gumbo, perhaps Philadelphia’s longest-living current band, which has been bringing a unique mix of black music styles—New Orleans R & B, funk, blues, soul. Reggae, even Afrobeat—ever since. Indeed Philly Gumbo championed authentic New Orleans music in Philadelphia, not the “Dixieland” jazz most people associated with New Orleans back then but R & B and “Mardi Gras Indian” music that at that time was not widely known. The band instigated annual Mardi Gras celebrations in Philadelphia, a tradition which continues today. With a mixed racial line-up and sometimes political lyrics, Philly Gumbo has played most every venue in Philadelphia, opened for such legends as Buddy Guy & Jr. Wells, Dr. John, The Mighty Diamonds, Rick Danko & Levon Helm of The Band, Mutabaruka and others, and often had such noted musicians as Todd Rundgren, David Lindley, Fats Domino guitarist Teddy Royal, avant-jazz sax player Byard Lancaster and others sit in with them. As the Philadelphia Inquirer declared that Philly Gumbo is “the area’s tastiest musical ragout of New Orleans parish soul, blues, reggae and dense funk” while Vintage Guitar Magazine noted that “On South Street, Philly Gumbo ruled the funk scene when The Roots were mere seedlings.” Twice a “Best of Philadelphia” selection by Philadelphia Magazine, Philly Gumbo remains the area’s best groove band, a musical force that crosses ethnic boundaries that will no doubt have people up and dancing again when they return to the Northwest and take the stage at Alma Mater in Mt. Airy on Saturday, April 2, 2016.

Four of the six members of Philly Gumbo live in Germantown or Mt. Airy and four out of six have been with the group since 1980; a fifth has played off and on with the group since the Eighties. Of the four original members, drummer Tim Hayes has played with such greats as Wilson Pickett, Little Milton and Johnny Shines, guitarist Pete Eshelman, who also leads Zydeco A-Go-Go, was the only American member of Philadelphia reggae band Roots Vibration, bass player Bert Harris was a member of African music ensemble He Kuumba and leads Jazz Planet, and keyboardist Randall Grass played with the Nigerian pop group Bongoes & The Groovies. Saxophone/flute/trumpet player Richard Orr, who last year became a full-time member after being first-call substitute for decades, has played with Harold Melvin & The Blue Notes among other top R & B groups as well as the ground-breaking world-fusion band Siembra. Powerhouse vocalist India Rex, the latest in a long line of great Philly Gumbo singers, is a generation younger than the other members of the band but despite her youth has a tremendous feel for “old school” R & B and blues singing. The diverse backgrounds of the band members makes for extraordinary versatility and an ever-shifting mix of music.

“We never set out to be recording artists or famous,” notes founding member Randall Grass.” Our only goals were to play the music with authenticity and to be the best groove band in the area. It’s funny, in our early years people thought our material was mostly original because the New Orleans R & B and much of the reggae just wasn’t well-known. Now, after many years of the New Orleans Jazz & Heritage Festival and tv shows like Treme’, all of a sudden we’re playing familiar material.”

Philly Gumbo was the catalyst for one of the most unique musical and cultural scenes Philadelphia has ever known, when they pioneered live music at Bacchanal at 1320 South St. The bar, owned in part by artists Joe Tiberino and Ellen Powell Tiberino, brought together a unique mix of people, poetry , art and music; Philly Gumbo played there to packed houses virtually every Saturday night for 10 years.

“There’s never been a place like Bacchanal in Philadelphia before or since,” notes Grass. “All kinds of people came in there—young, old, black, white, Latino and Asian, gay and straight, artists, students, doctors, bikers, lawyers, drug dealers, working people, people from the projects even the occasional movie star. It was a kind of free zone.”

The band, was also a regular at the fabled J.C. Dobbs, and appears in the documentary film “Meet Me On South Street” and kicked off the first annual Jambalaya Jam at Penn’s Landing.

“The beautiful thing is, “Grass adds, “is that virtually every time we play we get some magic moments at some point. People start smiling and they get up and dance and you can tell everyone feels alive and free. As long as that keeps happening, we’ll keep playing.”

PHILLY GUMBO performs at Alma Mater on Saturday April 2nd, 2016 from 9PM until 12AM. Alma Mater is located at 7165 Germantown Ave. in Philadelphia. Tickets are $12. For more information go to vvyvvv.almamaterphiladelphia.com or call 267-335-4909

A Historical Approach to the Positive Music: Jazz in Philadelphia

Mt. Airy USA pioneers use of new tool to eliminate vacancy and blight