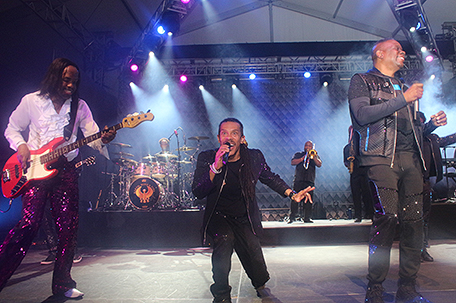 A veritable list of Philadelphia’s “who’s who” came out to mix and mingle with the Mistress of Ceremonies, Whoopi Goldberg, one of entertainment’s few EGOTs (Emmy, Grammy, Oscar and Tony award winners) and award-winning singer John Legend while noshing on the decadent offerings of Neuman’s Kitchen.  More than 1,500 guests attended the lavish event.

The mission of Philly Fights Cancer is to raise attention and awareness through funding , which supports clinical trials and translational research at the Abramson Cancer Center at Penn Medicine. The evening’s honorees were Lynn M. Schuchter, MD, Chief of Hematology Oncology and C. Willard Robinson, Professor of Hematology-Oncology at Penn Medicine and The Tara Miller Melanoma Foundation. 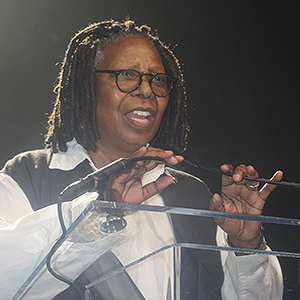 “The View” co-host and award-winning actor/director Whoopi Goldberg (in photo at left) served as MC for the star-studded evening.  (Photo: Robert Mendelsohn)

“Philly Fights Cancer Rounds 1 and 2 have raised over $9 million combined.” Said Abramson-Wolfson, “Based on the incredible turnout this evening, it seems that we are definitely accomplishing our goals. We are exceedingly grateful to all of you for supporting the Abramson Center Center, and being here this evening.

We all know why we’re here tonight… to support an incredibly worthwhile cause.” Caly Bevier, a 17-year-old ovarian cancer survivor and“America’s Got Talent” finalist, rounded out the dinner hour with a performance of “Titanium.” The lyrics “shoot me down, but I won’t fall, I am titanium” served as an inspirational reminder to everyone in attendance of the importance of their donations in an effort to find a cure for cancer. 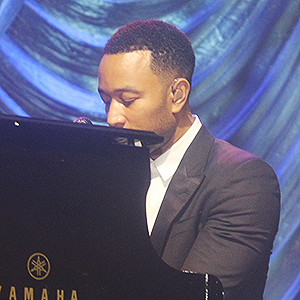 During the Live Fund appeal portion of the program, West Philadelphia native and artist King Saladeen donated an original piece of his art, signed by Goldberg and Legend. Goldberg also added a pair of shoes from her personal collection to the live fund appeal. The event raised a total of $7 million for the Abramson Cancer Center.  Immediately after the most significant victory of the evening, the audience erupted as Legend took the stage. He performed a one-hour set with a mixture of his best-known songs, a selection of classics, and a nod to TSOP with his rendition of Teddy Pendergrass’ “Wake Up Everybody.”

The evening ended with coffee, four rings of dessert offerings, and an after-party headlined by the elements… Earth, Wind & Fire. The seven-time Grammy-winning, Rock and Roll Hall of Fame inductees put on a dynamic show. “Sing A Song,” “September,” “After the Love Has Gone,” “Boogie Wonderland” and “Let’s Groove” were the soundtrack for the crowd as they danced the night away. Philly Fights Cancer: Round 3 was truly a night to remember.

Visit http://phillyfightscancer.org/ for more information and to find out ways you can contribute to taking cancer down for the count!