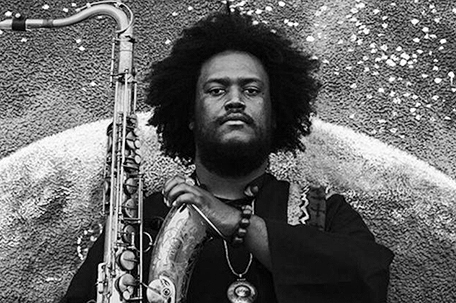 The Thanksgiving weekend is usually the kickoff to the holiday season in Philadelphia, and in this particular period. SOUTH Jazz Club will present a veritable cornucopia of performances by three of the City’s very best players. In addition, one of the standard bearers of the new avant-garde movement in jazz will be in town.

Tenor saxophonist Kamasi Washington has taken the jazz world by storm with music which has an Afro-futuristic bent as well as evoking the Black consciousness  movement in jazz which took place during the 60’s and 70’s. A native of South Central Los Angeles, Washington is part of a musical continuum which took place there with the legendary Horace Tapscott and the Pan Afrikaan People’s Orchestra,  Gerald Wilson, and the late, great drummer Billy Higgins.

His music recalls the ‘Black Consciousness “ music which was performed by such greats as Doug Carn, Azar Lawrence, and Gary Bartz. Having gained popular recognition with a guest appearance on rapper Kendrick Lamar’s “To Pimp a Butterfly” album, Washington became the toast of  young jazz fans and critics alike with his visionary debut “The Epic.”

He will be bringing his roadshow to Philadelphia under the auspices of the Ars Nova organization, who has gained a solid reputation as a presentor of cutting-edge jazz performers. Having seen Washington blow away a crowd in DC last summer, I would say his appearance in Philly is a  must-see event.

This exciting weekend debuts with tenorman Odean Pope appearing with his legendary trio which comprised bassist Gerald Veasley and drummer Cornell Rochester. Pope is part of the group of post-Coltrane tenor players which made a name for  themselves in the music as accomplished players.

Pope came up with that community of Philly jazzmen who made their mark on modern jazz during the 50’s and 60’s. This distinguished group which included the likes of Benny Golsen, McCoy Tyner,  Kenny Barron, Lee Morgan, and Archie Shepp. Pope got his big break when Coltrane chose him to take the horn chair in Jimmy Smith’s group.

It was a twenty – plus year stint with legendary drummer Max Roach where Pope honed his craft. There, Pope developed a unique sound which bridged avant-garde and hardbop styles.  This style is evident in the “supergroup” he formed over 30 years ago with Veasley and Rochester, a sound which I would best describe as the jazz equivalent of “thrash-metal” rock. Pope will be staging a rare reunion of this dynamic group and I would place this in the not-miss category.

Trombonist Papo Vazquez is considered one of the top players in the Latin jazz idiom. For over 40 years, the North Philadelphia native has been working in New York’s Latin music scene. He started playing with great artists as Ray Barretto, Eddie Palmieri, and Willie Colon. He later became a major player in the progressive Latin Jazz movement, where he worked with the legendary ensembles Grupo Folklorico Nuyorquino and Manny Oquendo’s Libre.

During the 80’s he played with the ground breaking Puerto Rican Group Batacumbele. Vazquez took his experience working with Batacumbele and started his own units, which played a funky  rhythm-heavy Latin musical mix which is known as “Bomba-Jazz.”

With his ensembles. known as the “ Mighty Pirates Troubadors,” Vazquez released a series of critically accclaimed works, including the Grammy Nominated “Marooned,” and “Oasis,” which featured none other than Wynton Marsalis and violinist Regina Carter. Vazquez’s appearance at SOUTH is somewhat of a homecoming,  and as an added bonus, he will be debuting his new CD. With Christmas coming up, Vazquez’s date is sure to be on the festive side.

Altoist Sonny Fortune is one of the great Philadelphia post-Trane saxophone players who came to prominence during the 60’s and 70’s. He was  influenced by not only John  Coltrane But also Charlie Parker. He also attained a high level of versatility on the flute and other reed instruments, Fortune started his career playing with the likes of Elvin Jones and Mongo Santamaria. It was in the 70’s that Fortune made a name for himself working with fellow Philadelphian McCoy Tyner and Miles Davis, where he was featured on the Davis classics “Big Fun,” “Get Up With It,” “Agharta,” and “Pangea.”

He also became a valuable component of the seminal progressive Latin Jazz unit The Fort Apache Band, which was led by brothers Andy and Jerry Gonzales. Fortune doesn’t come back to Philly too often, so this homecoming promises to be quite lively.