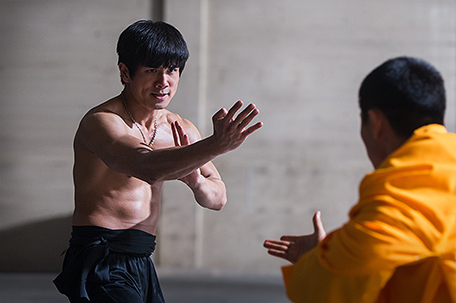 ABOVE PHOTO:  Philip Ng stars as the legendary Bruce Lee in the upcoming biopic, “Birth of the Dragon”  (Photo: bhtiltpublicity.com)

Based in Hong Kong, Philip Ng is a martial arts master who works in film and television as an actor, action director, and fight choreographer. Trained in Ving Tsun kung fu [Wing Chun], he is a 6th generation disciple of Choy Li Fut kung fu. Among his previous film credits are Wild City, Zombie Fight Club, Sifu vs. Vampire, The Man from Macau, Once Upon a Time in Shanghai, Young and Dangerous: Reloaded and Naked Soldier.

Ng immigrated to the United States from his native Hong Kong at the age of 7, then beginning his martial arts training under the supervision of his father, sifu [teacher] Sam Ng [a 5th generation practitioner of the Choy Li Fut system]. Later, to further his martial arts education, he traveled back to Hong Kong and became a student of sifu Wong Shun Leung, who trained him in Ving Tsun kung fu tirelessly until his untimely passing in 1997.

Returning to the U.S, Ng earned his Master’s degree at the University of Illinois Urbana-Champaign, during which time his training and sparring with other martial stylists gained him skills in the arts of jujitsu, eskrima, and Western boxing. He continues to spread his mentor’s teachings with the help of his father through the Ng Family Chinese Martial Arts Association.

Kam Williams: Hi Philip, thanks for the interview.

KW: What interested you in Birth of the Dragon?

PN: The fact that it’s a kick-ass kung fu movie inspired by the real life event of Bruce Lee’s challenge match against Wong Jack Man. While the outcome is still debated, the fight definitely gave Bruce the impetus to further evolve his fighting method and training methodologies. The events leading up to, including, and after the said fight cumulate in an entertainingly-romanticized kung fu fable that still manages to be true to the spirit of who Bruce Lee is, cinematically.

KW: Which do you admire more about Bruce Lee, his martial arts prowess or his movie career?

PN: I believe Bruce Lee placed martial arts first in his life, and everything else branched off from his passion for it. Being a martial artist first, I’ve always found his ideas regarding the martial arts to be revolutionary and proven correct repeatedly with the advent of MMA and other similar combat sports that continue to illustrate the realities of combat and the best strategies for success that he had advocated over four decades ago. In terms of film, Bruce paved the way for all of us martial arts actors the world over. He took a revolutionary step in martial arts choreography by making a shift to something more like an actual fight while keeping the movements stylized enough to be entertaining, cinematically.

KW: How did you prepare to play the role? Did you watch all of his films?

PN: I would say I’ve been unwittingly preparing to play him my whole life. My extreme interest in and curiosity about the legendary Bruce Lee and his ideas encouraged me to read all of his available writings and to watch all available footage of him. I have trained Wing Chun extensively with his instructor [Wong Shun Leung] under Grandmaster Ip Man. Plus, having worked in the action movie industry in Hong Kong for the last 15 years, as both an actor and martial arts choreographer on over 35 film and television productions, afforded me not only the skill set to confidently film a kung fu movie, I have also worked with many people who were close with Bruce and shared with me many of their anecdotes. After being selected to play him, I began preparing by specifically studying his speech patterns and how he moved while not engaged in combat, as I was already familiar with the way he moved when he fought.

KW: What was harder to get down, his personality or his fighting style.

PN: I’m pretty comfortable with filming onscreen combat, since I’ve been doing that professionally in Hong Kong for the last decade and a half. So, merging what was written and what I had been preparing to do justice to his cinematic personality was the greater of the two challenges. 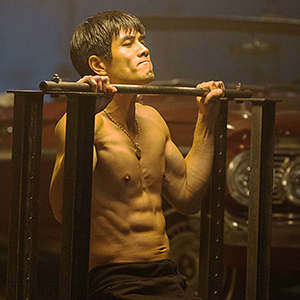 Philip Ng as the legendary Bruce Lee in “Birth of the Dragon” (Photo: bhtiltpublicity.com)

KW: You started studying martial arts at an early age. Did you have an icon who inspired you back then?

PN: Outside of people I watch on film, the ones that really inspired me were the people who actually taught me, hands-on, and guided into the martial arts world.

KW: You have done stunt work, choreographed fights and acted. Which is your favorite?

PN: That’s like comparing apples and oranges. But, at the same time, they’re just different cogs in the same engine. I like performing and also like designing the performance.

KW: What message do you want people to take away from Birth of the Dragon?

PN: I don’t remember. I almost remember holding my baby sister on my lap in Hong Kong when I was 3, but I’m not really sure if it’s an actual memory or something I remembered from a photo.

PN: I am Christian, and attend church as regularly as my work schedule allows.

PN: My mother and father. They still do.

PN: Not much other than what I wear. I am a pretty consistent version of myself, if I’m in the right mood.

PN: I don’t recall partaking in a pleasure that I felt guilty about.

PN: I can’t think of one at the moment.

PN: First, know what skill sets are required to succeed, then succeed in learning and mastering those skill sets.

PN: As someone who had a hand in telling more than a few entertaining stories and bringing awareness to the honest nature of combat sciences.

KW: Thanks again for the time, Philip, and best of luck with the film.

PN: My pleasure, Kam. Thank you for the interview.

To see a trailer for “Birth of the Dragon,” visit: https://www.youtube.com/watch?v=soLlxteBbNA